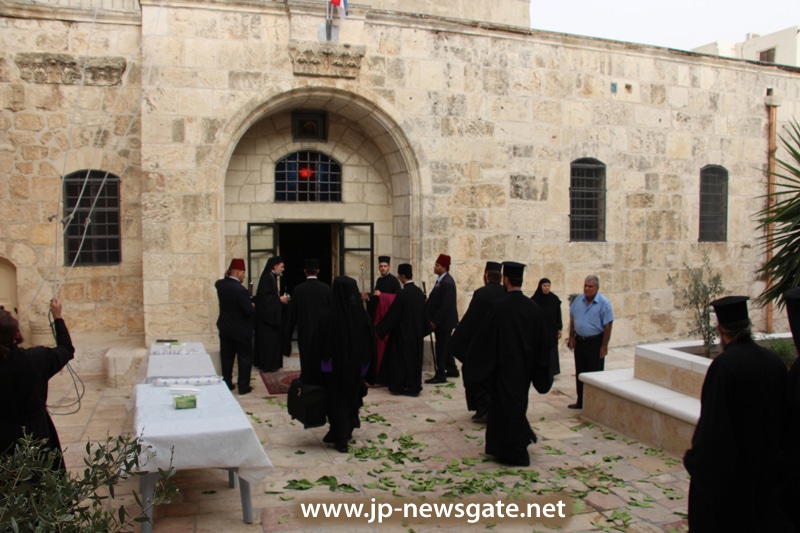 THE COMMEMORATION OF THE BEHEADING OF JOHN THE BAPTIST

On Friday, the 29th of August/11th of September 2015, the Patriarchate commemorated the Beheading of John the Baptist at the Monastery dedicated to him, which stands within the Christian quarter and is adjacent to the south of the Church of the Resurrection. An underground Church dated to the 4th c. lies within the Monastery, recently renovated by means of collaboration between the Patriarchate and Cyprus’ Leventis Foundation. Over this ancient church stands another, magnificent new church, its origins dated to the 11th c.

Vespers and the divine Liturgy were led by Archbishop Dorotheos of Avila. Hagiotaphite Hieromonks, namely Archimandrites Sophronius and Thaddaeus, the vicar of the Church of the Resurrection, f. Euthymius and Hierodeacon Markos. Archimandrite Aristovoulos sang with his assistants in the presence of a pious congregation of locals and pilgrims from Russia and Romania.

Patriarch Theophilos arrived during the divine Liturgy to venerate. He was accompanied by Hagiotaphite Fathers and Primates visiting from Russian, namely Tychon, former Head of the Russian Mission in Jerusalem (MISSIA) and Bishop Nikolaos of Ukraine.

The Patriarch and Primates were hosted to a reception by Archimandrite Bartholomew, overseer of the Monastery’s conservation and renovation works.