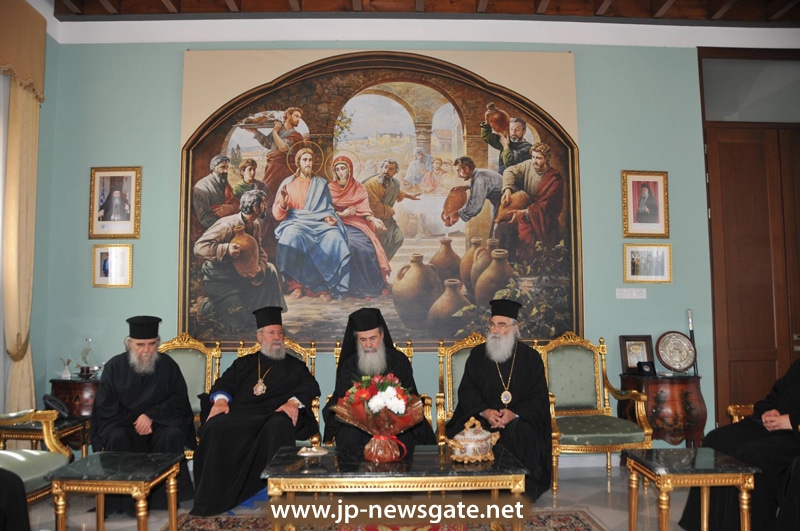 THEIR BEATITUDES, THE PATRIARCH OF JERUSALEM AND THE ARCHBISHOP OF CYPRUS, CO-OFFICIATE AT ST NIKOLAOS, KAKOPETRIA

On Saturday the 16th/29th of August 2015, Patriarch Theophilos of Jerusalem, accompanied by the Elder Secretary-General, Archbishop Aristarchos of Constantina, and Archdeacon Evlogios, arrived at Larnaka Airport via Athens.

His Beatitude and attendants were welcomed at the airport by Archbishop Chrysostomos of Cyprus and the Exarch of the Holy Sepulchre in Cyprus, Metropolitan Timotheos of Bostra.

From the airport, His Beatitude left for the recently renovated Exarchate of the Holy Sepulchre in Nicosia.

At noon of the same day, Archbishop Chrysostomos of Cyprus and Patriarch Theophilos of Jerusalem attended lunch hosted in their honour by Metropolitan Timotheos.

On Saturday evening, Patriarch Theophilos led the Vespers at the Church of the Resurrection and of St Philoumen the Hagiotaphite.

On Sunday morning, the 17th/30th of August 2015, Patriarch Theophilos and Archbishop Chrysostomos co-officiated at the Church of St Nikolaos, Kakopetria, with Metropolitan Timotheos and Archbishop Aristarchos. Concelebrating with them were Bishop Nektarios of Arsinoe, head of the Kakopetria Camps of the Archbishopric of Cyprus. The liturgy was attended by twenty youths of the Patriarchate of Antioch, headed by Archimandrite Romanos, twenty youths of the Patriarchate of Jerusalem, and youths from the Archbishopric of Cyprus, having spent a week at the Kakopetria camping site. During their stay, the campers had toured along the island’s sights of interest, while communicating amongst themselves and working together to their own benefit and to the benefit of their Church. The decision for their participation had been taken years ago by the Heads of the Four Old Churches, in the context of the “Orthodox Initiative”.

Communion in Christ during the Divine Liturgy was followed by lunch hosted by the Archbishop of Cyprus at the camping site, during which the two Primates answered to the youths’ questions and enjoyed ecclesiastical hymns, patriotic songs and dances performed by campers. All campers were offered an icon of Theotokos by Patriarch Theophilos and an Album of the Treasures of the Church of Cyprus by Archbishop Chrysostomos.

On the evening of Sunday, Patriarch Theophilos, accompanied by Archbishop Chrysostomos, left for Larnaka Airport. He arrived at Ben Gurion Airport at 3:00 am of Monday, the 18th/31st of August 2015.