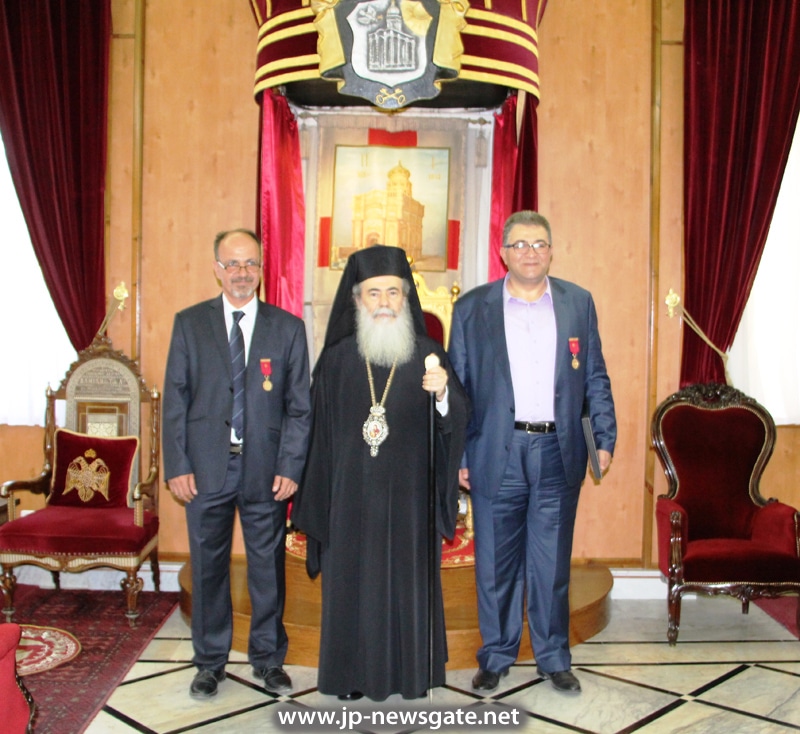 On Monday, the 11th/24th of August 2015, representatives of the Al-Quds University in the Jerusalem suburb of Abu Dis, namely its President, Imad Abu Kishek, and Archaeology professor, Salah Al-Houdalieh, visited the Patriarchate.

They were welcomed by H.B. Theophilos, Patriarch of Jerusalem, in the presence of Hagiotaphite Fathers.

The aim of the visit was to personally inform the Patriarch on the recent archaeological excavation in the city of Ramallah, specifically on land owned by the Patriarchate, which brought to light remarkable remains of a 4th c. AD Church and Monastery on the burial site of St Stephen the Protomartyr.

His Beatitude thanked the President and the Archaeology Professor of the University for the significant archaeological work they have performed, that led to the discovery of the remnants of a Church dating from the dawn of Christianity on the Holy Land. He also praised Archimandrite Galaktion, Hegoumen at the Monastery of the Transfiguration in Ramallah, for cooperating with the University. The cooperation, the Patriarch noted, greatly contributes to the peaceful coexistence between Christians and Muslims on the Holy Land. He went on to bestow on His guests the Patriarchate’s medal, minted on its 1500 anniversary, also offering financial aid for the continuation of the archaeological excavation.