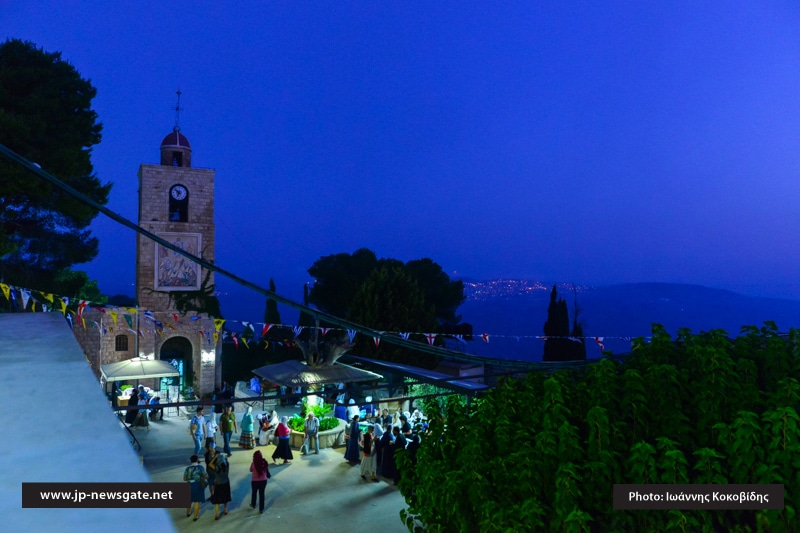 THE FEAST OF THE TRANSFIGURATION AT THE PATRIARCHATE (2015)

On Wednesday the 6th/19th of August 2015, the Patriarchate observed the feast of the Transfiguration of Our Lord Jesus Christ in commemoration of the event cited by the Evangelists (Matthew 17, 1-8), namely that the Lord took with him Peter, James and John the brother of James, and led them up Mount Tabor. There He was transfigured before them. His face shone like the sun, and his clothes became as white as the light. Just then there appeared before them Moses and Elijah, talking with Jesus.  Then the voice of the Father was heard from a cloud, saying: “This is my Son, whom I love; with him I am well pleased. Listen to him!” as Peter said to Jesus, “Lord, it is good for us to be here. If you wish, I will put up three shelters—one for you, one for Moses and one for Elijah” so that by means of that view, namely the revelation of His divine nature He would demonstrate man’s beauty before the fall and the possibility for man to regain it by grace.

The Transfiguration was celebrated:

1. On Mount Tabor, where the event took place, on the night of the feast, as Patriarch Theophilos officiated. Co-officiating were: Metropolitan Timotheos of Vostra, Archbishop Aristarchos of Constantina, Bishop Polycarpos of Tanagra, Greece, Hagiotaphite Hieromonks as the Hegoumen of Kana, Archimandrite Chrysostomos, and Archimandrite Paisios, Greek Orthodox Arabic-speaking presbyters and priests visiting from Russia, Greece, Romania and Ukraine, father Georgios from the Metropolis of Ilia, Greece, and the Patriarchal Commissioner of Accra-Ptolemais, Archimandrite Philotheos. A pious congregation of pilgrims from Greece, Russia, Romania and locals from the area of Northern Israel attended the service in piety.

To the faithful His Beatitude preached the Word of God in Greek.

Immediately afterwards, with the fear of God, faith and love, a large crowd proceeded to receive Communion for repentance, sanctification and eternal life. Before the Apolysis, the Patriarch read the prayer of the grapes, after which Archimandrite Hilarion hosted the Patriarchal retinue to a reception at the Hegoumeneion.

On the morning of the feast, Metropolitan Kyriakos of Nazareth led the Divine Liturgy at the Church of the Transfiguration. Co-officiating were Arabic-speaking Presbyters and Archimandrite Ieronymos.

At the Tomb of the Mother of God in Gethsemane, the feast of the Transfiguration of the Lord was observed with a divine Liturgy, led by Archbishop Demetrios of Lydda with Hagiotaphite Hieromonks co-officiating. The service was attended by a pious congregation of locals and Greek pilgrims, hosted by the Hegoumen, Archimandrite Nektarios.

At the Monastery of the Transfiguration in Ramallah, the feast was observed by means of a Divine Liturgy led by Archbishop Philoumenos of Pella in the presence of a large crowd of Greek Orthodox Arabic-speaking residents of the town participating en masse in the sacrament of the Holy Communion.

After Communion, the blessing of the grapes and the Apolysis, Archimandrite Galaktion hosted the Primates to the Hegoumeneion, followed by fish meal at a town restaurant.