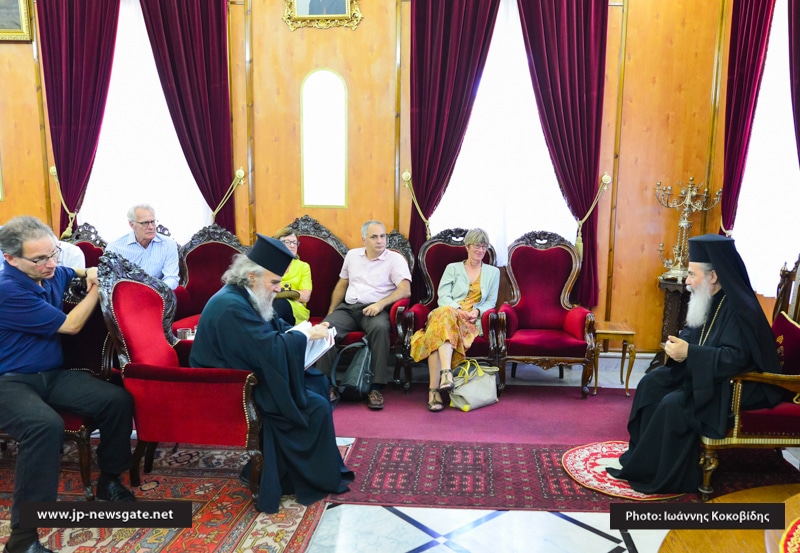 On Friday the 1st/14th of August 2015, representatives of the Academic Exchange (AE) initiative of the Yitzhak Rabin Center in Israel (founded in memory of the Israeli President, assassinated for his pacifist convictions) visited the Patriarchate.

They were welcomed by Patriarch Theophilos of Jerusalem, who responded to their invitation (posted at https://en.jerusalem-patriarchate.info/2015/08/14/16319 ) to talk about the Patriarchate’s history, work and mission.

The Patriarch explained to the delegation that the Patriarchate is, historically speaking, the first Church of Christianity, autocephalous and belonging to the order of Patriarchates since the Fourth Ecumenical Council in Chalcedon, in 451 AD.

Since the Byzantine times, the Patriarchate has been a carrier of spiritual, physical and venerating heritage and property.

In 638 AD, the Patriarchate entered a new historical era by means of the Treaty between Umar Hatab and the late Patriarch Sophronius of Jerusalem, who also took on the role of Ethnarch.

The relations of the Patriarchate with Islam have been formulated in the context of this agreement. The Patriarchate performs a missionary work towards its flock and a peacemaking, conciliatory work vis-à-vis the political governments where it has ecclesiastical jurisdiction, making an effort to preserve the pilgrimage status of Jerusalem, especially in the Old City.

The Patriarchate denounces and rejects any act of violence against humans, shrines, Churches, Synagogues and Mosques.

This peacemaking work is performed by the Patriarchate within its jurisdictions in the three Palestines and in the Sinai Peninsula, South Arabia to Qatar.

Within this jurisdiction and in the wider Middle East, Christians are being persecuted. The same applies in Israel, Jordan and the Palestinian Autonomy. In these countries, Christians enjoy such rights as freedom of religion and work, yet they live in a state of insecurity because of extreme religious elements launching attacks against Churches and Shrines.

After the Patriarch’s speech, the professors went on to submit questions and receive answers, before carrying on their visit to the Basilica in Bethlehem.