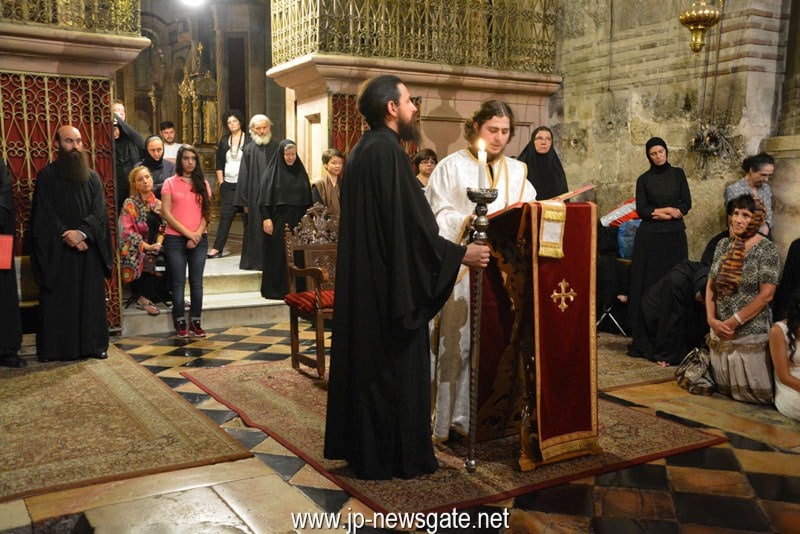 ORDINATION OF DEACON OF THE HOLY BISHOPRIC OF NAZARETH

On the night of Wednesday to Thursday, the 30th t0 the 31st of July/12th to the 13th of August 2015, during a nocturnal Divine Liturgy at the Holy Sepulchre, f. Symeon Ihab Beitjali, a Greek Orthodox from Nazareth, was ordained as deacon. The newly ordained is intended to first serve as deacon and then as presbyter priest in the city of Nazareth.

The sacrament of the ordination was attended by the Elder Sacristan, His Eminence Isidoros, Archbishop of Hierapolis, ministers at the Church of the Resurrection and other Hagiotaphite Fathers, the President of the Greek Orthodox Arabic-speaking Community in Nazareth, f. Symeon’s wife and children as well as other relatives, exclaiming “Worthy he is” upon the ordination.

Father Symeon then hosted the ordaining Primate and guests to a reception at the Office of the Church of the Resurrection, receiving their congratulations and wishes for a devoted diaconate in the glory of God, for the salvation of men.

The following day, f. Symeon and Metropolitan Kyriakos of Nazareth arrived at the Patriarchate, to receive the blessing of Patriarch Theophilos of Jerusalem.