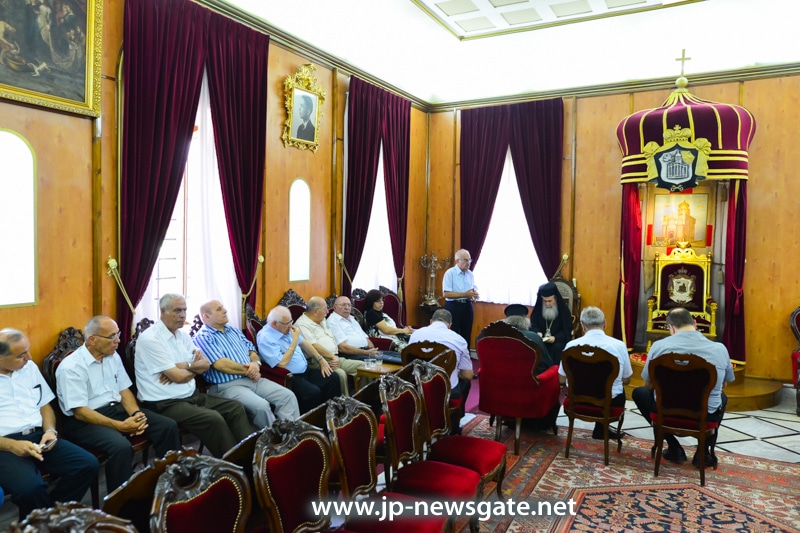 H.B. THE PATRIARCH OF JERUSALEM MEETS WITH THE NEWLY ELECTED EXECUTIVE COMMITTEE OF GREEK ORTHODOX ARABIC-SPEAKING COMMUNITIES IN ISRAEL

On Friday, the 25th of July/7th of August 2015, H.B. Theophilos, Patriarch of Jerusalem, met with the thirty five members of the recently elected Executive Committee representing all Greek Orthodox Arabic-speaking Communities of the Patriarchate in Israel. Heading the Committee was its reelected Chairman, former judge Raed Jarjura from Nazareth, and Vice-Chairman Basem from Kafr Yasif Community. Present at the meeting was the President of the Community of Nazareth, Ms Afaf.

The Executive Committee asked for His Beatitude’s blessing on its reelection and expressed its will to collaborate with the Patriarchate with trust and dedication for the promotion of matters of interest to the Communities, i.e. the education of the clergy, the Catechizing schools, the preservation of the Christians’ identity within the State of Israel, the defrocking of former priest Romanos, and the prosperity of Christians within the Arabic-speaking Muslim and Jewish society of Israel.

The Patriarch congratulated the Executive Committee on its reelection, offered His blessings and assured them that He will support its activities to the benefit of Greek Orthodox Arabic-speaking Christian Communities in Israel.