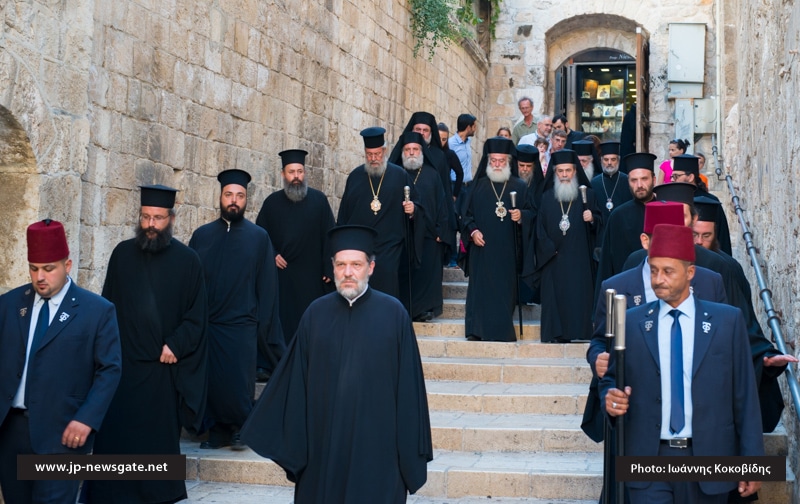 On Tuesday the 15th/28th of July 2015, their Beatitudes, Patriarch Theodoros of Alexandria and Archbishop Chrysostomos of Cyprus, visited the Patriarchate. They had traveled from Cyprus, accompanied by Protopresbyter, Mr Athenodoros Papaevryviadous.

The Heads of Churches were welcomed by Patriarch Theophilos of Jerusalem in the presence of the Patriarchal Commissioner, Metropolitan Isychios of Kapitolias, and the Elder Secretary-General, Archbishop Aristarchos of Constantina. From Ben Gurion airport, the Primates were driven to the Waldorf Astoria.

At approximately 6:00 pm of the aforementioned day, Patriarch Theodoros and Archbishop Chrysostomos, accompanied by Metropolitan Isychios, arrived at the Patriarchate’s gate, where they were warmly welcomed by members of the Greek Parish and the Hagiotaphite Brotherhood. From there, joined by Patriarch Theophilos, they walked to the All-holy Church of the Resurrection and venerated at the Holy Apokathelosis, the Holy Sepulchre, the Golgotha, and the Holy Cross at the Sacristy and the Office of the Church of the Resurrection.

From there they returned to the Patriarchate, to be addressed by Patriarch Theophilos in Greek.

In His reply address, the Patriarch of Alexandria said that his present visit to Jerusalem came twenty-three years after the first time, in 1975, when, accompanied by his Elder, Metropolitan Theodoros of Sfakia, venerated at the Holy Shrines and met distinguished Hagiotaphites, i.e. Patriarch Benedictus of Jerusalem, Metropolitans Germanus of Petra and Vasileios of Caesarea, the late Archimandrite Theodosios and others. Patriarch Theodoros also referred to Hagiotaphites who rose to the rank of Patriarch of Alexandria, such as Meletios Metaxakis and Photios, Metropolitan of Nazareth.

The Patriarchate of Alexandria, he said, follows the Typikon of the Monastery of St Savva the Sanctified, and is strengthened by the Grace of the Holy Sepulchre in performing its apostolic work in the vast continent of Africa. This hopeful future is anticipated by His Beatitude with optimism, by the help of God.

His Beatitude Chrysostomos, Archbishop of Cyprus, also pointed out that this visit was driven by the words of the Apostle Paul that, if one member suffers, so do all suffer, and that love for peace and unity among the Churches had led the steps of Patriarch Theodoros and Himself to the Holy Land, thanking Patriarch Theophilos for the hospitality, openness to dialogue and understanding.