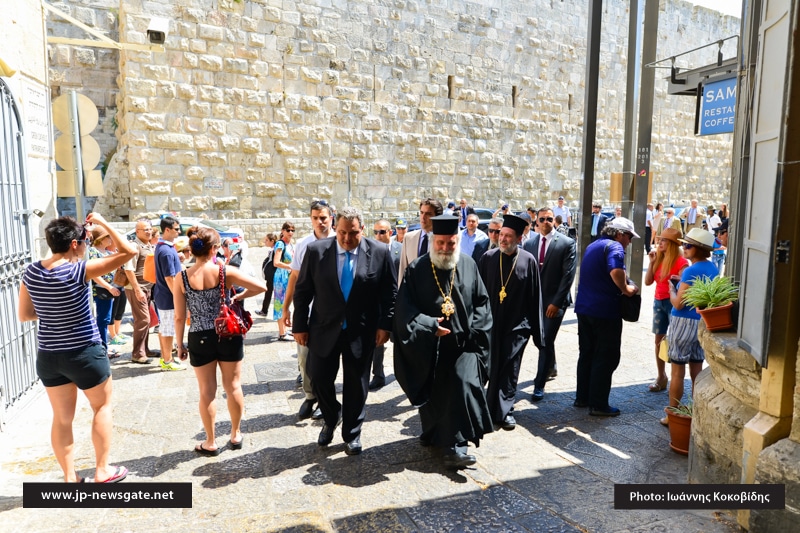 On Monday the 7th/20th of July 2015, the President of the “Independent Greeks” and Greece’s Minister for Defence, Mr Panagiotis Kammenos, visited the Patriarchate. He was accompanied by his wife, Ms Eleni Tzouli; Ambassador Eleutherios Karagiannis; the Director of his Political Bureau, Air Marshal Theologos Symeonides and his wife; Vice-Admiral Kyriakos Kyrakides; his aide-de-camp, lieutenant-colonel Theophanes Karapatis; lieutenant Panoraia Chronopoulou, Mr Georgios Kontorinis and Mr Athanasios Kafalis, members of the Minister’s personal guard; photographer Vasileios Syriopoulos and journalist Andreas Koutras. The meeting took place in the context of the Minister’s official visit to the State of Israel and the Palestinian Autonomy.

His Excellency the Minister and his attendants were courteously welcomed by H.B. Theophilos, Patriarch of Jerusalem, in the presence of Hagiotaphite Fathers.

An interesting discussion followed, on the international state of affairs and the instable political situation in the Middle East, manifest by means of violent incidents and executions of innocent people, among whom the Primates who had been kidnapped in Syria. Reference was also made to the peacemaking contribution of religions, in particular the Orthodox Church and the Patriarchate of Jerusalem that has been entrusted with the safekeeping of the Holy Shrines in Jerusalem and across the Holy Land. This peacemaking role is performed by the Patriarchate of Jerusalem with the moral support and assistance of Greece, the successor of the Byzantine Empire.

On the fortuitous occasion of this visit, His Beatitude bestowed on Mr Kammenos the honorary title of Supreme Taxiarch of the Equestrian Order of the Holy Sepulchre, in recognition of his services to the Nation and the Church, and also to seal the Minister’s pilgrimage tour. The Patriarch pointed out that Mr Kammenos is awarded the title for his strong support of the principles of Orthodoxy, before offering him an icon of Panaghia Jerusalemite.

On his part, Mr Kammenos thanked His Beatitude and pledged to carry on promoting the rights of our Nation and of Orthodoxy in the Holy Land, awarding Him the emblem of the Hellenic Ministry of Defence and a replica of the Icon of Panaghia Soumela, protectress of the uprooted Greeks of Pontus. He then continued his tour in the Holy Sepulchre and Golgotha within the All-holy Church of the Resurrection.