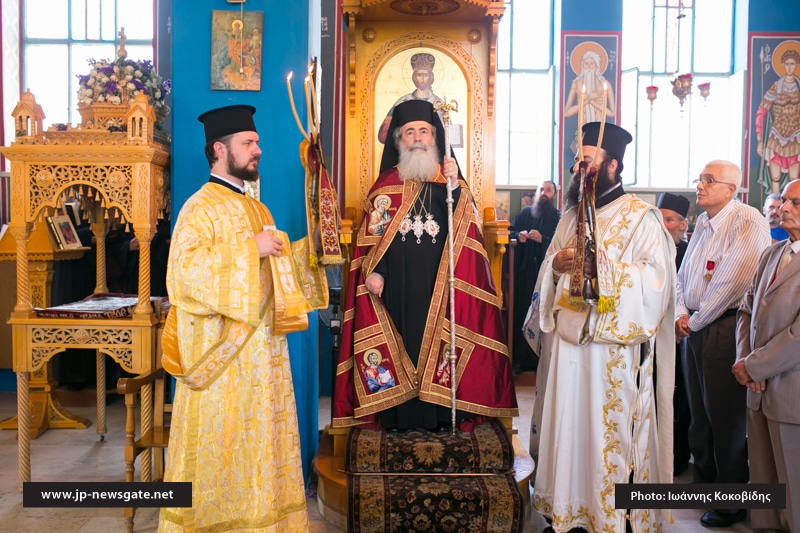 THE FEAST OF ELISHA THE PROPHET IN JERICHO

On Saturday, the 14th/27th of June 2015, the Patriarchate observed the memory of the prophet Elisha in Jericho, at the Monastery dedicated to his name, on the site of the sycamore fig-tree where Zacchaeus had climbed to see Christ (Luke 19, 1-10).

The Monastery is dedicated to Elisha because Jericho was the prophet’s main area of activity.

The prophet Elisha hailed from the town of Abel-Maula of the Jordan river region. There, the prophet Elias had summoned him to become his disciple. After sacrificing the twelve oxen he owned to feed the people, he followed Elias.

The Old Testament books contain several references to Elisha’s miracles by the grace of God, for instance turning the bitter waters on the foothills of Mount Sarantarion to sweet and potable; the retrieval of an ax from the Jordan river, the resurrection of the son of the lady of Shunem and the crossing of the river on Elias’ sheepskin, which Elisha had asked from him before he rose to heaven in a fiery chariot.

The Divine Liturgy was led by Patriarch Theophilos of Jerusalem. Co-officiating were Metropolitan Kyriakos of Nazareth, Isychios of Kapitolias, Narcissus of Nubia, visiting from the Patriarchate of Alexandria, and Archbishop Aristarchos of Constantina. Hegoumens Chrysostomos, Narcissus, Ignatius and Ieronymos also concelebrated with Archimandrite Paisios of Mount Sinai, Hieromonks, Hierodeacons and Arabic-speaking priests from Nazareth and Beit-Jalla. The pious congregation consisted of nuns, pilgrims and members of Jericho’s Arabic-speaking community.

On the conclusion of the Divine Liturgy and the blessing of the grapes by the Patriarch, a procession followed thrice around the Church. Guests were hosted to lunch at a restaurant, where Ms Nahinda Halten spoke in Arabic.