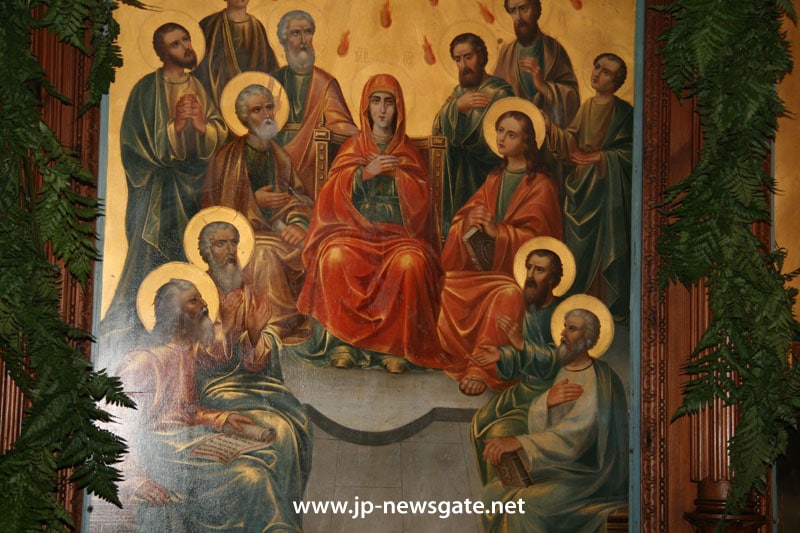 MONDAY OF THE HOLY SPIRIT ON MOUNT ZION

On Monday, the 19th of May/1st of June 2015, the Patriarchate celebrated the feast of the Holy Spirit that enlightened the Apostles, on the site where the enlightenment took place, namely on Mount Zion.

On the eve of the feast, Vespers was performed and Pentecost wishes recited in Greek and Arabic, at the Holy Spirit Chapel within the Cemetery, led by Archbishop Dorotheos of Avila. Hagiotaphite Hieromonks co-officiated, as Archimandrite Aristovoulos sang in Greek and St James Choir sang in Arabic. Monks, nuns and pilgrims attended the service in piety.

On the conclusion of Vespers, School Principal, Nikolaos Zervis, hosted the Primates to lunch at the Patriarchal School.

On the following day, Monday of the Holy Spirit, the Divine Liturgy was held at the Holy Trinity Church, led by Archbishop Dorotheos of Avila, with co-officiating Hieromonks and Hierodeacons.

The Procession then returned to the Church after first making a supplication for the departed at the south gate to the Cemetery.

On the completion of the Procession, a reception followed at the School’s hall of events, for Primates and the congregation.