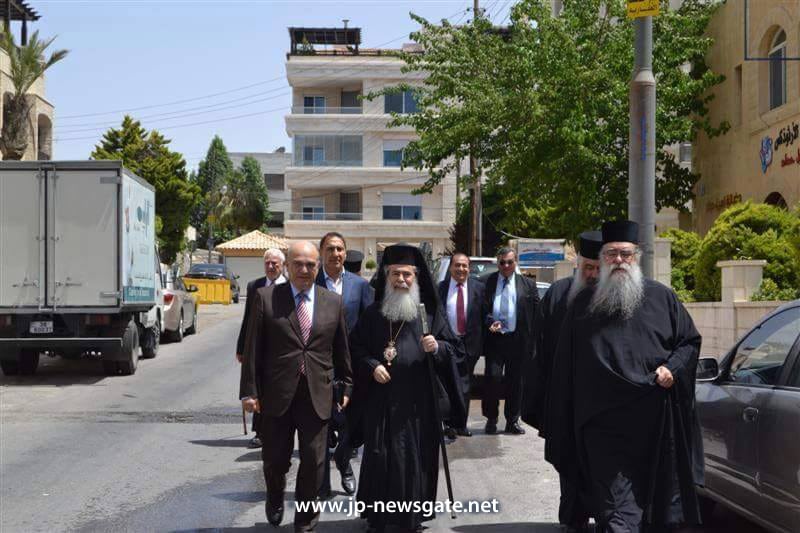 PASTORAL VISIT OF H.B. THEOPHILOS, PATRIARCH OF JERUSALEM, TO JORDAN

On Monday, the 12th/24th of May 2015, Patriarch Theophilos of Jerusalem, accompanied by Archbishop Aristarchos of Constantina, and Archimandrite Ieronymus, Hegoumen at Fhes, paid a pastoral visit to Jordan, lying within the church jurisdiction of the Patriarchate.

His Beatitude was welcomed by priests of the Patriarchate’s parishes in Jordan and personalities of the Greek Orthodox flock there, i.e. former Minister, Mr Munder Hadadin, and former MP, Mr Ode Kawas. Upon the Patriarch’s arrival at the Metropolis of Amman, He was welcomed by the recently set up Advisory Committee. There, the Patriarch informed the Committee on the situation of the Church in Jerusalem and the recent intervention of the Israeli Police in the Aedicula of the Holy Sepulchre.

A meeting followed between Patriarch Theophilos and all the priests of parishes within the Patriarchate’s Metropolis in Jordan, in the presence of Metropolitan Benedictus of Philadelphia, Archbishop Philoumenos of Pella, Archimandrite Hilarion, Archimandrites Innocentius, Chrysanthos and Christophoros.

This hieratic gathering was addressed by His Beatitude in Greek.

After His address, the Patriarch expressed His joy on meeting His spiritual children, priests and laymen alike, and declared His will to pay more frequent visits. Archimandrite Hilarion, hegoumen at Mount Tabor, then talked on works sponsored by the Patriarchate and by Charity Associations, for instance the renovation and decoration of churches in various cities of Jordan, purchase of a plot of land in Antana, reparations on St George church in Karak, renovation of St Nikolas church in Marka etc. The sum spent for the total of these works rises to approximately half a million dinars.

Archimandrite Hilarion then spoke about works of conservation and reparation in Israel, decoration of churches, purchase of bells, purchase of a plot of land in Rene, Nazareth for half a million dollars etc. These works are carried out under the supervision of f. Hilarion and upon the subvention of the Patriarchate and donations by pious Christians.

Archimandrite Christophoros then pointed out that a new page is now turned as regards his relation with the Patriarch, and thanked Him for His love and trust.

Participants were then hosted to lunch offered by the Advisory Committee. There, His Beatitude’s address was read in Arabic by f. Petros Janho. The Chairman of the Advisory Committee, Mr Kamel Abu Jamber, underlined the importance of the Patriarch’s visits for the support of the flock in Jordan and of Christians in the Middle East.

A private meeting then followed, between the Patriarch and the Advisory Committee, during which His Beatitude stressed the importance of the Patriarchate for Jerusalem and the maintenance of its political status, and also underlined the need for collaboration between the faithful and their priests.

His Beatitude asked for the Committee’s collaboration in the execution of the Patriarchate’s work.

Responding in a relevant question, the Patriarch said that although schools are important for teaching the Orthodox faith, true teaching begins within the family.

On the afternoon of the same day, His Beatitude and Metropolitan Benedictus participated in a reception hosted by the King of Jordan in celebration of the Independence of Jordan.

On the following day, His Beatitude met with 20 members of the Executive Advisory Committee at the Metropolis, where issues pertaining to the enlightenment of the flock were discussed, for instance by way of explanatory books translated into Arabic.

On Tuesday, His Beatitude returned to the Patriarchate, thanking God for the success of this pastoral visit.