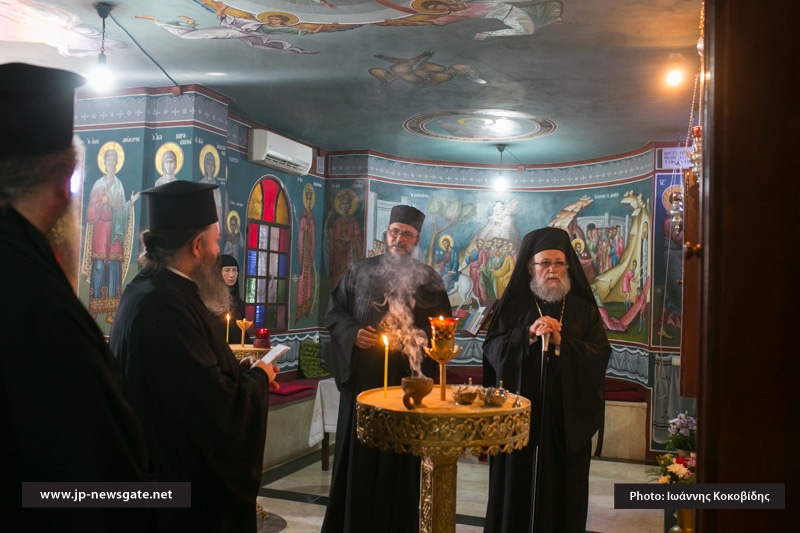 On Thursday, the 8th/21st of May 2015, the Patriarchate observed the despotic feast of the Ascension on the Mount of Olives, the site of the Lord’s Ascension into heaven.

The feast commemorates the fact that, forty days after His Resurrection, our Lord and Saviour, Jesus Christ, ascended into heaven in glory and, having within Him our human nature, sat to the right of the Father, deifying mankind. From there he sent forth the Holy Spirit to illuminate and strengthen the disciples, and establish the Church that carries on His salvaging work on earth.

The feast was observed on the site of Christ’s Ascension. Vespers was led by Archbishop Dorotheos of Avila, followed by a procession to the church of the Men of Galilee, Galili Viri, where Patriarch Theophilos waited. There, a supplication was made and the gospel passage on the Ascension was read in Greek, Russian and Arabic, before the procession returned to the site of Vespers.

On the following morning, the divine Liturgy was again led by Archbishop Dorotheos. Co-officiating were Metropolitan Jeremiah of the Polish Church, Hieromonks, Arab-speaking presbyters of St James Cathedral, and priests visiting from Greece. Archimandrite Eusebius sang with cantors from Greece and Patriarchal School students on the right; on the left sang St James Choir in Arabic. In attendance was a great crowd of local Christians from Jerusalem and Palestinian Autonomy towns, venerating the footprint of the Lord as He ascended into heaven.

Strengthened by the blessing of the Ascension of the Lord, the Church now awaits the feast of the Descent of the Holy Spirit upon the Apostles.