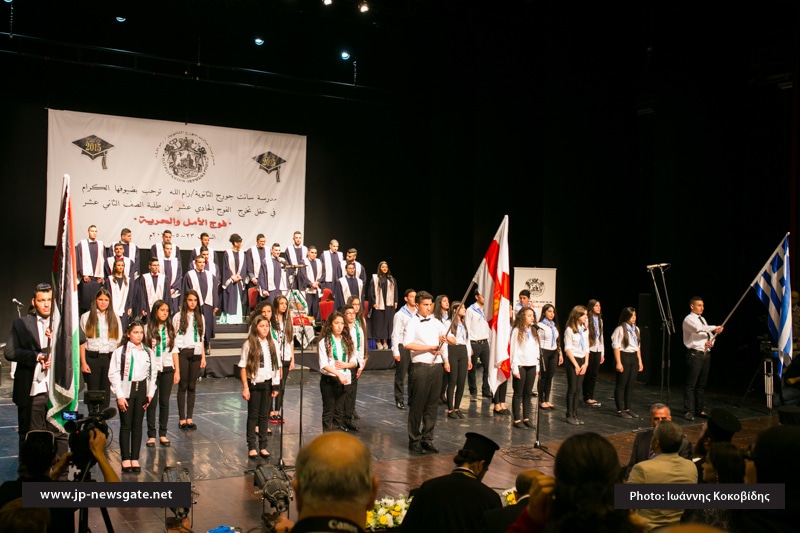 H.B. CONFERS TITLES ON GRADUATES OF PATRIARCHAL SCHOOL IN RAMALLAH

On the afternoon of Saturday, the 9th/23rd of May2015, the graduation ceremony of the Patriarchal School in Ramallah took place at the events hall of the Culture Peace Center.

The ceremony was honoured by the presence of Patriarch Theophilos of Jerusalem, the Patriarchal Commissioner, the Elder Secretary-General, the Chairman of the Board of Education for Patriarchal Schools in Israel, Archimandrite Ieronymus, the Hegoumen at the Monastery of the Transfiguration, Archimandrite Galaktion, priests from Ramallah and adjacent towns, the parents of the graduates, the Patriarchate’s liaison with Arab-speaking media, f. Issa Mousleh, Ms Nora Kourt, the school Principal, Mr Richard Zananiri, and teachers.

The well-organized graduation ceremony began with the Principal’s welcoming speech, the entrance of the graduates, the performance of the Palestinian National Anthem and a reading of the passage from the Gospel according to John, on Christ being “the Bread of Life”.

A screening followed of activities pursued by the graduates during 2015, introduced by a presentation in memory of martyr Nadim Nawara, the student who was murdered last year by Israeli soldiers at a protest. Two students went on to welcome guests, one in Arabic and the other in impeccable Greek. Principal Zananiri also made an address.

The event was enriched by performances of Palestinian songs and dances. Honorary distinctions were then offered by the School to the father of Nadim Nawara, His Beatitude, the School principal, Metropolitan Isychios of Kapitolias, Archimandrites Ieronymus and Galaktion, f. Issa Mousleh and to three top-notch students.

The ceremony closed with the award of diplomas by the Patriarch to all graduates, along with wishes for social, spiritual and professional success.