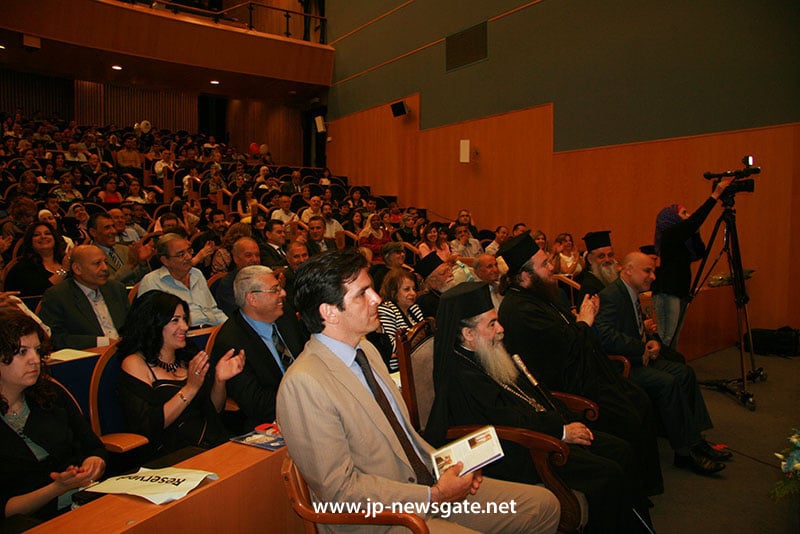 On the afternoon of Tuesday, the 6th/19th of May 2015, the graduation ceremony of St Demetrius Patriarchal School took place at the Notre Dame Hotel near the New Gate.

His Beatitude Theophilos, Patriarch of Jerusalem, blessed the ceremony by His presence. He was accompanied by Archbishops Aristarchos of Constantina and Demetrios of Lydda, the Chairman of the Board of Education for Patriarchal Schools in Israel, Archimandrite Ieronymus; Protopresbyter f. Issa Mousleh, the Patriarchate’s liaison with Arab-speaking media; the Assistant Dragoman and Master of Ceremonies, Archimandrite Bartholomew.

The ceremony began with the “Christ has risen” prayer, one-minute silence for the Palestinian fallen, and a recitation of the Palestinian and Greek National Hymns. The School Principal, Mr Samir Zananiri, then addressed guests, thanking His Beatitude for the Patriarchate’s interest in the School.

Addresses were also made on behalf of the graduates in both English and Greek, extending thanks to the Patriarchate for providing them with the wealth of Greek education, the mother of civilization. Thanks were also extended to their parents and teachers. Performances of traditional Palestinian and Greek dances enriched the ceremony.

The event closed with the Patriarch’s speech, read in Arabic by f. Issa Mousleh, and the conferral of diplomas on 19 graduates. Upon conferring the titles, His Beatitude wished students success in their studies and professional career. In their turn, the School presented His Beatitude with an honorary plaque in expression of gratitude for His moral support.