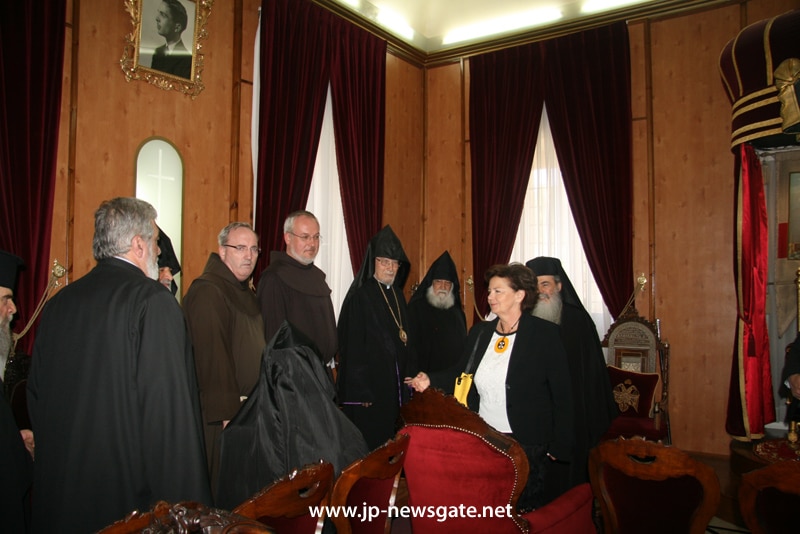 A DELEGATION OF THE METSOVION TECHNICAL UNIVERSITY OF GREECE, HEADED BY A. MOROPOULOU, VISITS THE PATRIARCHATE

On Monday the 5th/18th of May 2015, Ms Anastasia Moropoulou, Professor at the National Technical University of Greece and Director of Studies in the “Materials and Conservation Interventions” Direction, visited the Patriarch of Jerusalem. She was accompanied by the University’s Interdisciplinary Team, namely: C. Spyrakos of the School of Civil Engineers, A. Georgopoulou from the School of Agronomists and Topographers, A. Bakolas, A. Delengou and S. Lampropoulou from the School of Chemical Engineers, M. Troullinos, Conservator at the Ministry of Culture and M. Alexani, Marie Curie Fellow at the National Technical University of Greece.

The Delegation arrived in Jerusalem on the invitation of the Patriarchate in order to produce initial diagnostic projects related to the stability of the structure of the Aedicula of the Holy Sepulchre, erected in 1810. The aforementioned project has been initiated following an unconstitutional attempt of the Israeli Department of Antiquities and the Israeli Police to intervene in the Aedicula, two months ago.

The distinguished scientists were warmly received by His Beatitude in the presence of the Patriarchal Commissioner, the Elder Secretary-General, the Secretary of the Holy Synod, Archbishop Methodios of Tabor, Archbishop Isidoros of Hierapolis and other Hagiotaphite Fathers. Also present at the meeting were the representatives of the Franciscan Custodians, Monk Athanasios Makora and f. Dobr Omir, as well as the Armenian Archbishop, Ari Sevrenian, and f. Samuel, Hegoumen of the Armenian’s Church of the Resurrection. The Patriarch was informed of the team’s study plan and offered instructions related to the pilgrimage status of the site. The aim of the stabilization works is to guarantee the safety of pilgrims on the site of the Lord’s Burial and Resurrection.

His Beatitude stressed the need for quality works, while Ms Moropoulou gave assurances of maintaining the monument’s structure with the help of Professor Grazie Touci of the University of Florence. The Holy Aedicula, she said, is the most precious monument of Orthodoxy, the Greek genus and all Christians.

The team of scientists then left the Patriarchate, accompanied by Theodosios Mitropoulos, Architect of the Church of the Resurrection. The Elder Sacristan, Archbishop Isidoros of Hierapolis will be assisting them in their mission.