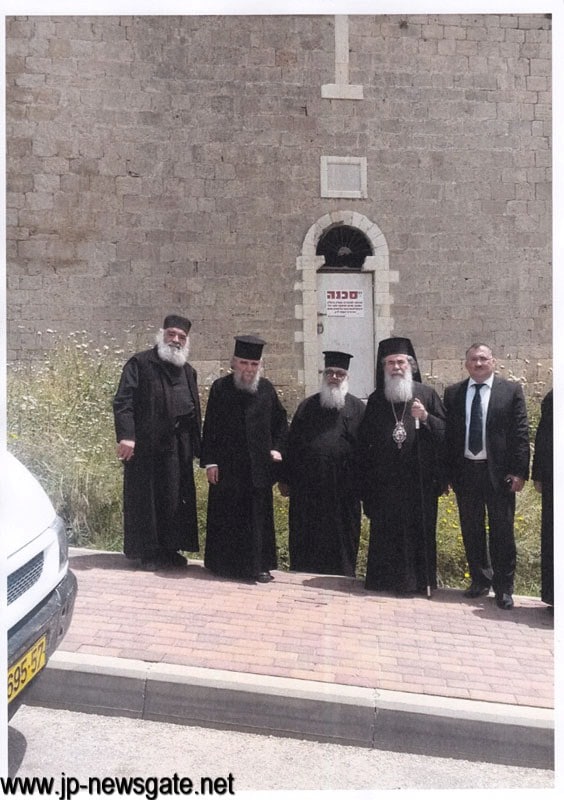 On Monday, the 14th/27th of April 2015, H.B. Theophilos, Patriarch of Jerusalem, accompanied by the Elder Secretary-General, Archbishop Aristarchos of Constantina, Archimandrite Ieronymos, Hegoumen in Fhes, and the Hegoumen of the Monastery of the Transfiguration on Mount Tabor, f. Hilarion, visited the Israeli town of Shelomi which lies on the site of the old town of Basia that had been in existence until 1948.

The Greek Orthodox Arab-speaking community that inhabited Basia left the town during the events that resulted to the foundation of the state of Israel in 1948.

The church, dedicated to St George, attests to the old prime of the Community, but bears the evidence of attrition and abandonment.

Based on an agreement in compliance with the law on the Archaeological Service of Israel, signed between the Patriarchate and the Mayoralty of Shelomi, the Patriarch visited the Mayor, Mr Gubi Naaman, to discuss the church’s restoration and conservation.

During this visit, which was also attended by the Patriarchate’s legal consultant, Mr Munir Kamal, and constructor Mr Nander, the principles on which the agreement shall be based were discussed in the context of a sincere dialogue. The agreement provides for the restoration of the church as a cultural monument contributing to the abolition of religious fanaticism and incidents of violence, and to a peaceful coexistence between Jews, Christians and Muslims.