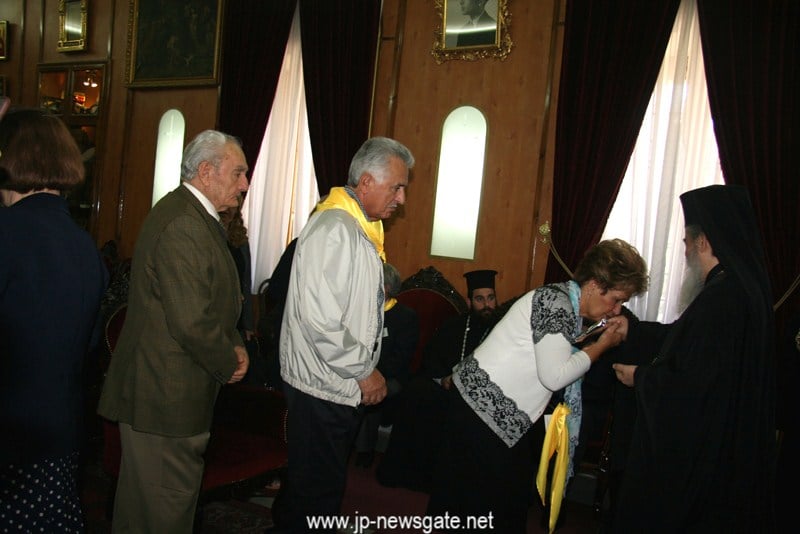 On Saturday the 12th/24th of April 2015, a group of fifty pilgrims, most of them Cretans, but also Greeks of the American diaspora and “Archons” of the Ecumenical Patriarchate, visited the Patriarchate of Jerusalem, led by Metropolitan Eugenios of Rethymnon and Avlopotamos.

The esteemed pilgrims were welcomed by Patriarch Theophilos in the presence of Hagiotaphite Fathers.

Both Metropolitan Eugenios of Rethymnon and the Head of the Archons, Archon Eutaxias, Mr John Manos, addressed the Patriarch and expressed joy over having fulfilled their wish to visit the Holy Land, especially the Lord’s Life-Giving Holy Sepulchre, and receive blessings. As tokens of their love, appreciation and respect, they offered His Beatitude gifts of Cretan art and a painting of the historical Monastery of Arkadion.

Thanking them, His Beatitude pointed out that pilgrims visiting the Holy Lands are blessed as they receive sanctification through the incarnation, crucifixion and resurrection of Jesus Christ, Whose blood had drenched this land.

Patriarch Theophilos expressed His own joy for the words of the Most Reverend Eugenios, Metropolitan of Rethymnon, and of the “Archons” of the Ecumenical Patriarchate in America, a point of reference for the Greek genus.