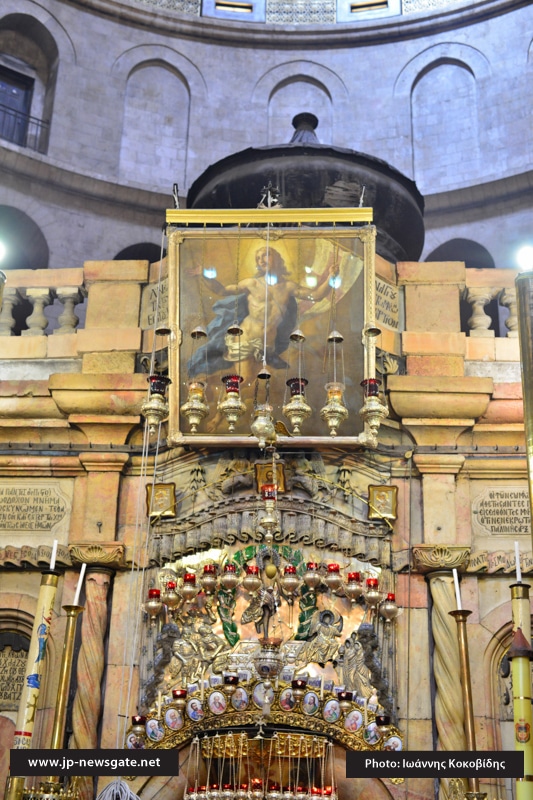 SUNDAY OF THOMAS AT THE PATRIARCHATE (PARRHESIA AT THE HOLY SEPULCHER)

On the 6th/19th of April 2015, the first Sunday after Easter (Antipascha) or Sunday of St Thomas, the Patriarchate celebrated the appearance of the Resurrected Lord to His disciples in the Cenacle, eight days after His Resurrection, when Thomas believed and said “My Lord and God” (John 20, 26-31).

On the eve, at 3:30 pm, the feast began with the Ninth Hour of the Resurrection at the Monastic Church of Sts Constantine and Helen.

Procession followed to the Church of the Resurrection where the officiating Primate, Patriarchal Commissioner, Metropolitan Isychios of Kapitolias, venerated at the Holy Apokathelosis, as did the other Primates.

The Great Vespers was then held, as well as the Great Entrance and the Breaking of Bread, led by Metropolitan Isychios.

On the morning of Sunday the 6th/19th of April 2015, a procession began to the Church of the Resurrection.

There, the Divine Liturgy was led by Metropolitan Isychios of Kapitolias. Co-officiating were the Assistant Dragoman, Archimandrite Bartholomew, and the master of ceremonies, Archimandrite Porphyrios. Several pilgrims participated with joy and piety.

At the end of the service, the Primates returned to the Patriarchate, where the Patriarchal Commissioner distributed Jerusalemite blessings to all.