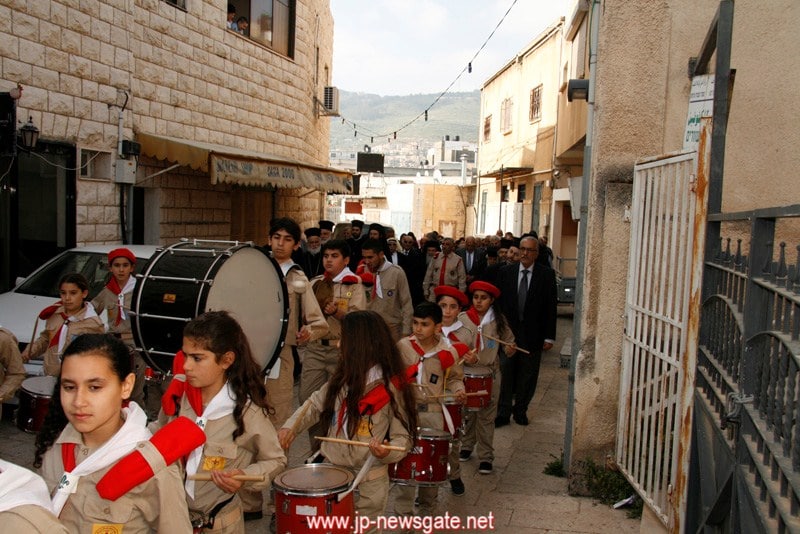 The appearance of the Resurrected Lord to his disciples in the Cenacle, where Thomas “saw and believed that this is my Lord and God” was celebrated by the Patriarchate in Kana, Galilee, near Nazareth.

In the same town, the Lord, had turned water into wine for guests to a wedding.

The feast was led by Patriarch Theophilos of Jerusalem.

In the entrance to the town, His Beatitude was warmly received by the faithful, then walked to the Church accompanied by Boy Scouts, the Hegoumen of the Monastery of Kana, Archimandrite Chrysostomos, Metropolitans Kyriakos of Nazareth and Isaiah of Tamassos, on a visit from Cyprus, and Timotheos of Bostroi, Exarch of the Exarchate of the Holy Sepulchre in Cyprus. Accompanying the Patriarch was also the Municipal Council of the Kana Rum Orthodox Community and Orthodox priests and faithful.

Matins and the Divine Liturgy were held in the Church, led by Patriarch Theophilos. Co-officiating were the Metropolitans of Nazareth and Bostroi, and Archbishop Aristarchos of Constantina, and the Hegoumens of the Monasteries of Tiberias and Mount Tabor.

During Communion, the Patriarch preached the Word of God in Greek.

After the apolysis, local community officials congratulated the Patriarch in the forecourt to the church. A brief performance of traditional dances followed, courtesy of the Kana Catechizing School.

His Beatitude and retinue were then hosted to festive lunch, after which the Patriarch visited old man Abu-Daud in his house, and a faithful from Kana who had fallen ill during the divine liturgy.