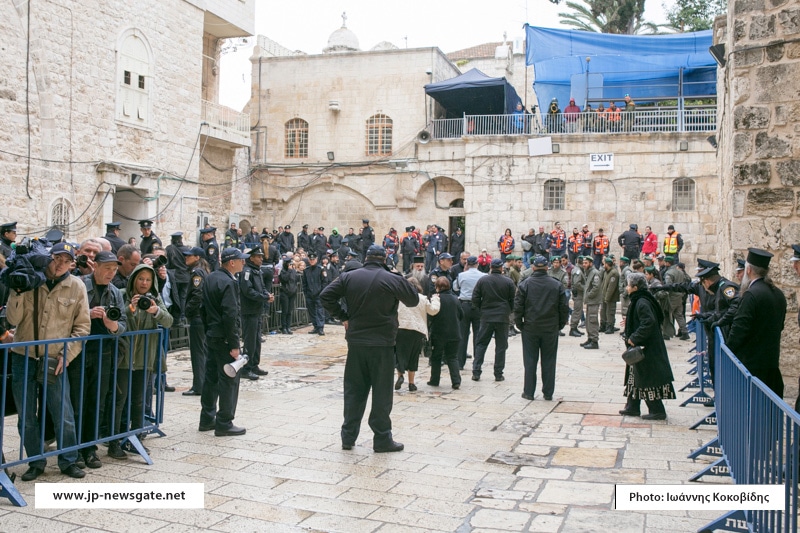 THE HOLY LIGHT CEREMONY AT THE PATRIARCHATE

At noon of the Holy Saturday the 29th of March/11th of April 2015, the Holy Light ceremony was performed at the Church of the Resurrection.

The days leading to the ceremony had been marked by thorough, at times exaggerated, preparation in terms of safety measures taken by the Israeli Police of Jerusalem.

According to the instructions of the Police, the Patriarchate reported all sites of accommodation of Greek pilgrims, arranged into groups in order to proceed to Sts Constantine and Helen Church, accompanied by the Police, from where they walked to the Church of the Resurrection.

Similarly, pilgrims of other nationalities arrived at the Church following the instructions of the Israeli Police.

At 12:00 pm Patriarch Theophilos walked to the Bema of the Katholikon.

He was joined by Priests of the Armenians, Copts and Syrians, assigned to receive the Holy Light.

Then the procession began from the Katholikon towards the Holy Aedicula, led by the Greek Patriarch and a crowd of faithful of various denominations.

At the conclusion of the third procession around the Holy Sepulchre, the Greek Patriarch was followed by the representative of the Armenian Patriarch until the Angel’s Stone.

Praying within the Holy Aedicula on the Sepulchre, His Beatitude offered the Holy Light to the Arab-speaking priest of St James Church, who carried the Light to the Bema of the Katholikon.

As the doors of the Aedicula opened, His Beatitude offered the Holy Light to Copts, Syrians and Ethiopians as well as to the faithful who brought the Light close to their hands, eyes and foreheads for assistance, enhancement, consolation, progress and salvation.

The entire Church was bathed in lit tapers held by the faithful.

The Holy Light ceremony was followed by the divine Liturgy of St Basil the Great, led by Archbishop Theophanes of Gerassa, as the Patriarch and His retinue walked to the Patriarchates. There, they welcomed the Greek delegation of the Ministry of Foreign Affairs, led by Metropolitan Pavlos of Glyfada, and the Exarch of the Holy Sepulchre in Athens, Archimandrite Stephanos. Also present was the Cypriot delegation, led by Exarch Timotheos, Metropolitan of Bostroi. Both delegations were charged with carrying the Holy Light to Greece Cyprus via special flights.