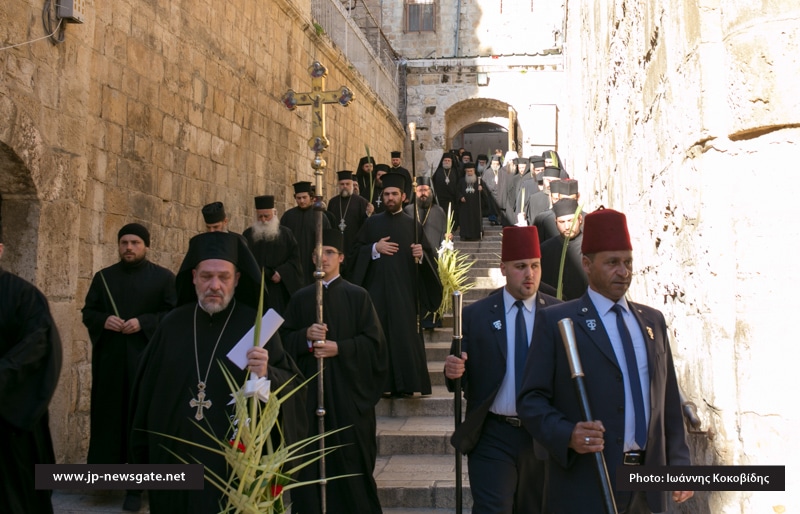 PALM SUNDAY AT THE PATRIARCHATE

On Palm Sunday, the 23rd of May/5th of April 2015, the Patriarchate commemorated the triumphant entry of our Lord Jesus Christ to Jerusalem, when the children of the Jews had welcomed him by spreading their coats in the road, shouting “Hosanna to the Son of David! Blessed is he who comes in the name of the Lord!”

On Saturday afternoon, at 2:00 pm, the Ninth Hour was read at the monastic church of Sts Constantine and Helen.

Immediately afterwards, Hagiotaphite Fathers, Primates, Priests and monks, led by His Beatitude Theophilos, Archbishop of Jerusalem, proceeded to the Church of the Resurrection.

There, the Patriarch gave blessings and performed a censing, while the Primates venerated at the Holy Apokathelosis [Deposition from the Cross].

Veneration was also performed at the Holy Sepulchre.

Vespers began upon entrance to the katholikon whilst deacons were performing a censing along the Holy Shrines and the “Anoixantaria” were sung by the Head Cantor of the Church of the Resurrection, Archimandrite Aristovoulos.

Vespers was attended by pious pilgrims visiting from Greece and elsewhere.

On the morning of Palm Sunday, the Patriarchal Hagiotaphite Retinue walked in procession to the Church of the Resurrection.

There, the Divine Liturgy began at the katholikon, led by Patriarch Theophilos. Co-officiating with Him were the Most Reverend Isychios, Metropolitan of Kapitolias, and their Eminences Archbishops Dorotheos of Avila, Aristarchos of Constantina, Methodios of Tabor and Demetrios of Lydda; also, Metropolitan Georgy of Nizhni Novgorod and Archbishop Demetrius of Orshansk from the Church of Russia; Hagiotaphite Hieromonks, Hierodeacons and presbyters visiting from the Churches of Greece, Russia, Ukraine, Serbia and Romania. In attendance was the Greek Consul-General to Jerusalem, Mr Georgios Zacharoudiakis, and a great crowd of faithful from Greece, Russia, Ukraine, Cyprus and Romania.

On the conclusion of the Divine Liturgy, a procession began from the Beautiful Gate of the Katholikon thrice around the Holy Sepulchre as His Beatitude, Primates, priests and the faithful carried palm branches.