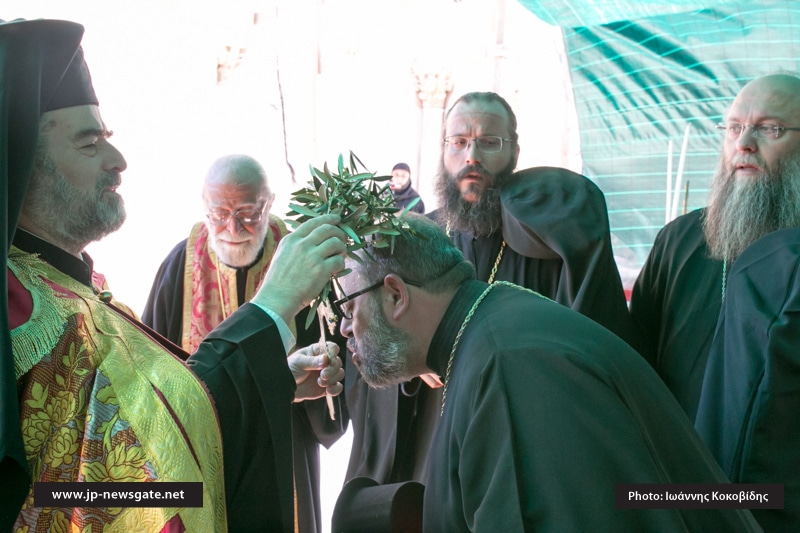 LAZARUS SATURDAY AT THE PATRIARCHATE

On Lazarus Saturday, the 22nd of March/4th of April 2015, the Patriarchate commemorated the raising of Lazarus, Christ’s friend from Bethany.

A. On Friday afternoon:

The event was commemorated on Friday afternoon on the Site of the Ascension of Christ on the Mount of Olives, being adjacent to Bethphage and Bethany, with Vespers performed on the ruins of the old Byzantine Church of the Ascension (now a mosque), after the outdoor Holy Altar had first been consecrated.

Vespers was led by Archbishop Theophanes of Gerassa with co-officiating Hieromonks and Arab-speaking presbyters, as Archimandrite Aristovoulos sang with the Choir of St James Cathedral. A crowd of monks, nuns and pilgrims attended the service.

After Vespers, Hegoumen Achillios hosted guests to a short reception at the Monastery of the Ascension, after which the first part of the Small Compline was read with the feast’s Canon.

A procession then followed to the Shrine of the Men of Galilee, where Patriarch Theophilos was waiting to listen to the First Eothinon Gospel by the officiating Primate, Archbishop Theophanes of Gerassa.

The procession returned to the Shrine where the reading of the Small Compline was completed, marking the conclusion of Lazarus Saturday feast on the Mount of Olives.

1. On the Mount of Olives

On the morning of Lazarus Saturday, the 22nd of March/4th of April 2015, the Divine Liturgy was held on the Site of the Lord’s Ascension, led by Archbishop Theophanes of Gerassa, with co-officiating Hieromonks and the priests of St James Cathedral, as well as priests visiting from other Churches. Archimandrite Aristovoulos sang with novices and monks of the Patriarchal School and St James Choir.

On the conclusion of mass, Monk Achillios hosted guests to a reception at the Monastery of the Ascension.

The raising of Lazarus from the dead was also celebrated at the Monastery dedicated to his sisters, Martha and Maria, which lies at a short distance from his tomb in Bethany.

Matins and the Divine Liturgy were led by Patriarch Theophilos and co-officiating Primates in the presence of the Greek Consul-General to Jerusalem and a great crowd of locals and pilgrims.

His Beatitude preached the Word of God in Greek.

An official procession followed to the Tomb of Lazarus, where the pericope of the Rising of Lazarus according to John was read (John 11, 1-44).

On the conclusion of mass, the Prelatic Retinue visited the Municipal Authorities of Bethany, was then hosted to meatless lunch at Martha and Maria Convent, offered by the Abbes, Nun Eupraxia.