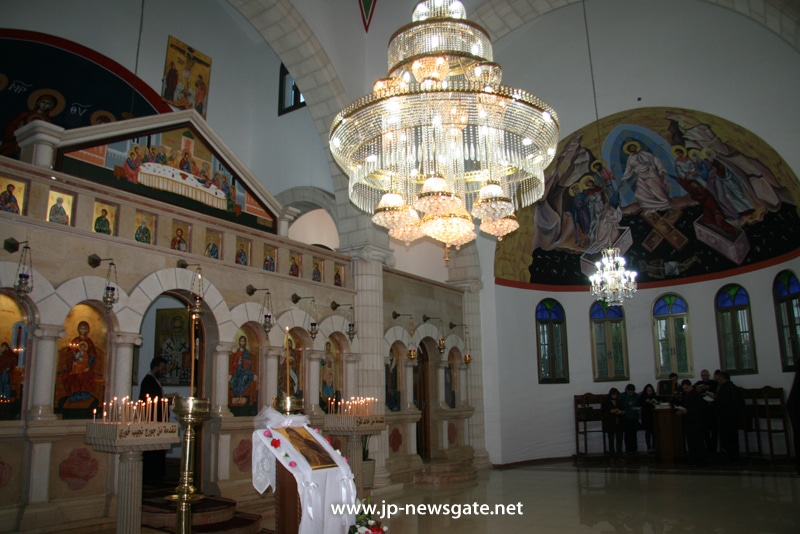 THE THIRD STASIS OF THE SALUTATIONS AT THE PATRIARCHATE

On the evening of Friday, the 28th of February/13th of March 2015, Patriarch Theophilos of Jerusalem, accompanied by the Elder Secretary-General, Archbishop Aristarchos of Constantina, Archimandrite Stephanos, Hegoumen at St Catherine Monastery, Archdeacon Evlogios, Deacon Markos and f. Ioustinos, Hegoumen at Jacob’s Well, visited the Rum Orthodox Community of Raffidia in the city of Nablus, Samaria. There, He was welcomed by Protosyncellus Leontios and the Community Council. Upon His arrival, the Patriarch led the Third Stasis of the Salutations and the Canon of the Akathist Hymn at the newly-constructed Church of the Annunciation of Theotokos.

Before the apolysis of the service, His Beatitude spoke to the congregation in Greek.

On the conclusion of mass, the Hegoumen and the Community hosted the Patriarch and the flock to a meatless reception at the Events Hall which is adjacent to the Church.

During the reception, a discussion took place on issues pertaining to the Community, aimed at receiving His Beatitude’s advice and guidance.

In the framework of this visit, the Patriarch allowed Protosyncellus Leontios to wear a cross during the exercise of his pastoral diaconate as Hegoumen of the Community of Raffidia.

The Akathist Hymn and Third Stasis of the Salutations were also performed at the Church of the Resurrection, led by Metropolitan Isychios of Kapitolias, with co-officiating Hagiotaphite Fathers.

The service was broadcast live on the Patriarchate’s Radio Station.