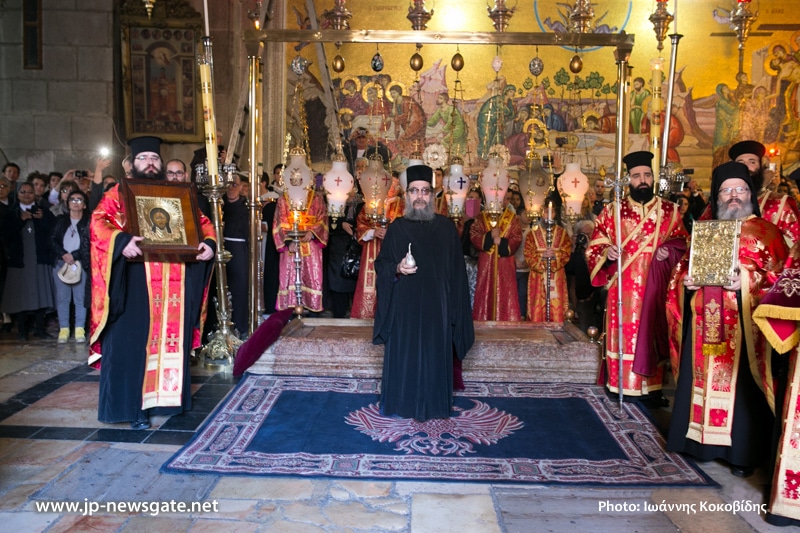 SUNDAY OF ORTHODOXY AT THE PATRIARCHATE

On the first Sunday of the Great Lent, the 16 of February/1st of March 2015, the Patriarchate celebrated the restoration of the icons and the triumph of Orthodoxy.

On Saturday evening, the 9th Ode was read at the monastic church of Sts Constantine and Helen, followed by procession to the Church of the Resurrection.

There, censing was performed at the Holy Apokathelosis, before veneration at the Holy Sepulchre and entry into the katholikon.

His Beatitude Theophilos, Patriarch of Jerusalem, blessed the gathering so as Vespers begin amidst bells ringing.

On the conclusion of Vespers, the Syrians exercised their right to venerate at the Golgotha without a cross, a prelatic crown and a rod holder (rhabdouchos).

At 7:00 am on Sunday, the Patriarchal Hagiotaphite Retinue walked to the Church of the Resurrection in official procession.

At the katholikon, Patriarch Theophilos put on a mantle and gave blessings, before entering the Bema, where He embraced the Primates. The Divine Liturgy began as soon as they all stepped out into the katholikon.

Co-officiating with His Beatitude were: Metropolitan Isychios of Kapitolias, Archbishops Theophanes of Gerassa, Dorotheos of Avila, Aristarchos of Constantina, Theodosios of Sebaste and Demetrius of Lydda, Hagiotaphite Hieromonks, Archdeacon Evlogios and other Hierodeacons. Present at the mass was the Greek Consul-General to Jerusalem, as well as a large congregation of locals and pilgrims from Greece, Russia, Romania and Ukraine.

After the apolysis, a procession of the icons was performed thrice around the Holy Sepulchre, the Holy Apokathelosis, the shrines and the “Touch me Not”, down to the area before the Aedicule.

There, the Synodicon of Orthodoxy was read, including wishes for eternal memory of those restoring and venerating the icons.

The procession was broadcast live on the Patriarchate’s Radio Station via the Internet.

On the conclusion of the procession, the Patriarchal Retinue proceeded to the Patriarchates, where His Beatitude addressed all present in Greek.