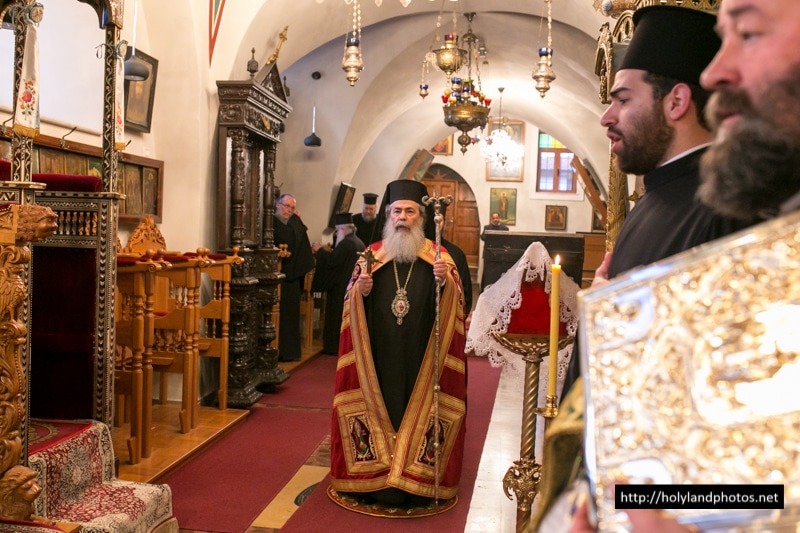 THE HYPAPANTE OF THE LORD CELEBRATED AT THE PATRIARCHATE

On Sunday, the 2nd/15th of January 2015, namely Meatfare Sunday, the Hypapante of the Lord was celebrated at the Church of Sts Constantine and Helen. Patriarch Theophilos of Jerusalem led the Divine Liturgy.

On the same day, the Hypapante of the Lord was also observed at the Church of the Holy Monastery of Seida Naya which lies to the North-East of the Patriarchate, in the Christian quarter.

The feast commemorates the presentation of Jesus Christ to the Temple of Solomon on the completion of forty days from His Nativity, according to the stipulation of the Law that “every male that opens the womb shall be called holy to the Lord”. There, He was received by the righteous Simeon, who said: “Lord, now you are letting your servant depart in peace, according to your word; for my eyes have seen your salvation that you have prepared in the presence of all peoples, a light for revelation to the Gentiles, and for glory to your people Israel” (Luke 2, 22-38).

His Eminence Theophanes, Archbishop of Gerassa, led the Vespers and Divine Liturgy, preaching the Word of God to Greek-speaking and Arab-speaking faithful (see video), while teachers and students at the Patriarchal School sang with members of the Christian Community of Jerusalem, in the presence of the Greek Consul-General, Mr G. Zacharoudiakis.

Patriarch Theophilos proceeded to venerate in the course of the Divine Liturgy.

After mass, abbess Seraphima hosted the Patriarchal retinue to a reception in her quarters.