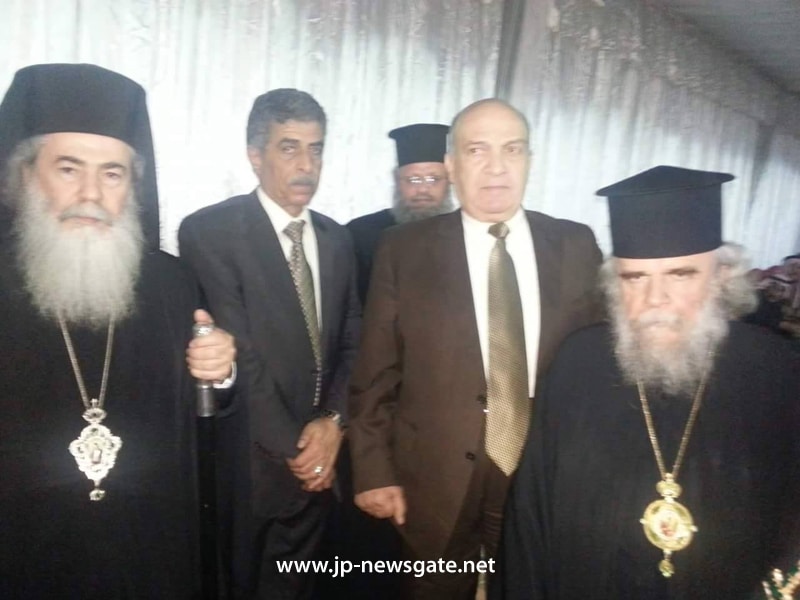 THE PATRIARCH OF JERUSALEM MEETS WITH ADVISORY COMMITTEE IN JORDAN

On the afternoon of Friday, the 24th of January/6th of February 2015, Patriarch Theophilos of Jerusalem met with approximately twenty members of the Executive Committee of the recently appointed Advisory Committee in Amman, Jordan. The Patriarch was accompanied by Metropolitan Isychios of Kapitolias, Patriarchal Commissioner; Archbishop Aristarchos of Constantina, Elder Secretary-General; Archbishop Philoumenos of Pella, Patriarchal Commissioner in Northern Jordan; the Hegoumen in Fhes, Archimandrite Ieronymos, and Ms Wafa Gousous, M.E.C.C. Director of the Amman Office.

The Committee has been set up by Patriarch Theophilos of select members of the flock in Jordan, in order to collaborate with the Patriarchate towards the investigation and settlement of problems facing its flock, and the consolidation of its unity.

The Executive Committee was headed by its Chairman, Kamal Abu Jaber, and Vice-Chairman Munther Haddadit.

At the meeting, members of the Committee greeted the Patriarch’s visit as a blessing and moral enhancement for Jordan’s Orthodox flock and as a token of support of all Christians in Jordan.

On His part, His Beatitude pointed out a series of questions in need of settlement, i.e. the frequency of His visits to Jordan and His meetings with the flock there, the setting up of Press Center for the promotion of the Patriarchate’s work against its denigrators, the foundation of a Center of Orthodox Studies and of a School for Clerics, the arrangement of press conferences on the work of the Patriarchate, the setting up of an Audit Committee, the convening of the plenary session of the Advisory Committee, and meetings with the Patriarchate’s critics aimed at reuniting them with the rest of the flock in a single body accepting the Patriarch of Jerusalem as Christ, because as a Primate, the Patriarch is as Christ on earth.

His Beatitude carefully listened to the Committee’s opinions, even those that were unfavourable, and said that in His view, priority should be placed on founding schools in Salt and Karak and supporting Christians against abandoning their homes in the Middle East, as well providing support to the Hashemite family in its fight against violence and for the preservation of truth.

At the end of the meeting, His Beatitude and His retinue left for Karak, Jordan, to offer their condolences to the relatives of the brutally executed Jordan pilot Maaz al-Kassasbeh, who hailed from Karak.

On the following day, Saturday the 25th of January/7th of February 2015, His Beatitude returned to the city of Karak in order to inspect reparation and renovation works carried out at the Church of the Patriarchate’s Greek Orthodox Arab-speaking Community.