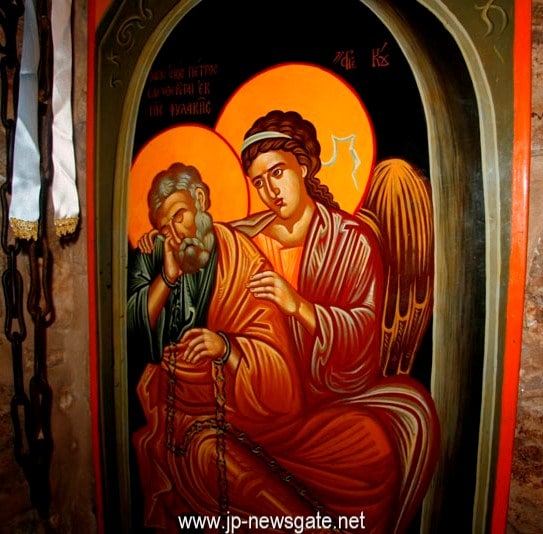 On Thursday, the 16th/29th January 2015, the Patriarchate celebrated the veneration of the chains of the glorious Saint and Apostle Peter.

The incarceration of the Apostle Peter by Herod Agrippa, aimed at his execution in order to please the Jews, and his miraculous liberation by an angel is reported in the Acts of the Apostles (Acts, 12) and believed to have taken place in the prison within the Holy Monastery of St Nicodemus, Christ’s secret disciple. The prison is also known as the Convent of Lentils because of St Helen having distributed lentils amongst the hungry crowd during a period of starvation in Jerusalem.

At the Chapel dedicated to the chains of the Apostle Peter, Archimandrite Meletios led the Vespers, with Archbishop Theophanes of Gerassa officiating the divine Liturgy on the day of the feast. Co-officiating with him were priests and hierodeacons, as Archimandrite Eusebius and nuns sang in the presence of members of the Christian Community of Jerusalem and pilgrims.

During the divine Liturgy, His Beatitude Theophilos, Patriarch of Jerusalem, proceeded to venerate with Hagiotaphite Fathers.

His Beatitude, His Eminence, priests and the congregation were courteously hosted to a reception by the Monastery’s Abbot, Hieromonk f. Makarios.