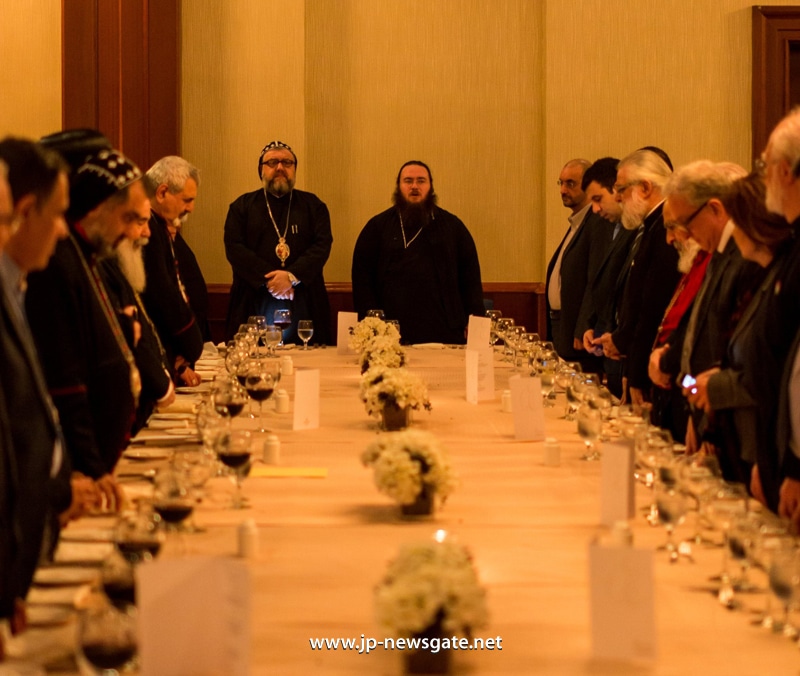 MEETING OF THE M.E.C.C. EXECUTIVE COMMITTEE

On the 9th and 10th/22nd and 23rd of January 2015, the Executive Committee of the Middle East Council of Churches (M.E.C.C.) was convened at the Marriott Hotel by the Dead Sea.

Leaders or the Representatives of Leaders of the Four Families comprising the M.E.C.C. participate in this Committee, namely: the Eastern Orthodox (Patriarchates of Alexandria, Antioch, Jerusalem, Church of Cyprus) the Pro-Chalcedon (Armenians, Copts, Syrians), the Catholic and the Evangelical Churches.

Patriarch Theophilos of Jerusalem was the president of the Orthodox Church in this Committee. He was accompanied by the Elder Secretary-General, Archbishop Aristarchos of Constantina, and Archimandrite f. Ieronymus, Abbot in Fhes.

The opening address of Patriarch Theophilos, in English, has been posted on the Patriarchate’s Website, at: https://en.jerusalem-patriarchate.info/2015/01/22/11624

An address was also delivered by the Syrian Catholic Patriarch of Lebanon, His Eminence Ignatius, who underlined the acts of violence committed against Christians and other innocent citizens in Iraq and the whole of the Middle East. The Lutheran Bishop in Jerusalem, His Grace Munib Younan, pointed out the significance of the meeting of Churches on the site where the Lord was baptized, especially today when atrocities are being committed against the innocent, asking how the M.E.C.C. may put a halt to these acts of violence and find a balance between freedom of religion and freedom of expression.

On the conclusion of the speeches, father Michael Jallack, acting general secretary of the M.E.C.C., read his report in English, see link: https://en.jerusalem-patriarchate.info/2015/01/23/11616

Also posted on the Patriarchate’s website is a video featuring the report of Ms Wafa Gousous, M.E.C.C. Director of the Amman Office, on the activity of the Office as regards Syrian and Iraqi refugees in the Zaatar camp.

The deliberations of the two-day meeting of the M.E.C.C. were concluded on Friday the 10th/23rd of January, at noon. The relevant press release will be posted here in due time.