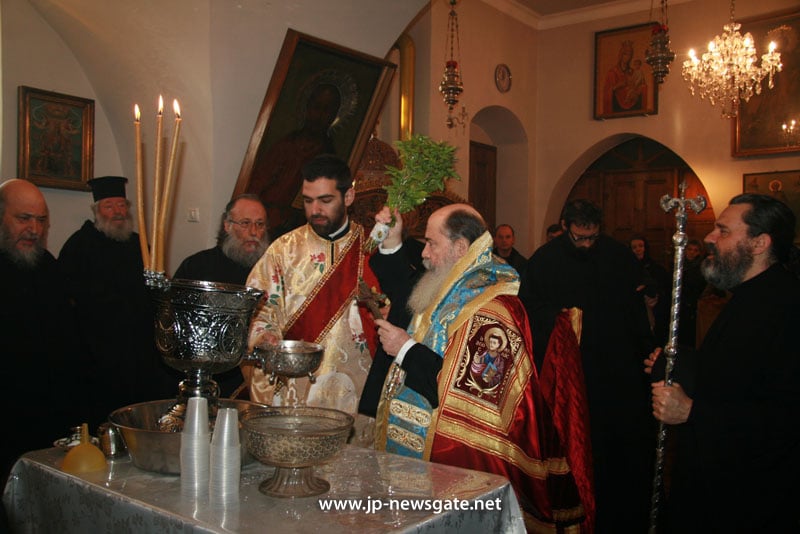 THEOPHANY EVE AT THE PATRIARCHATE

On Sunday, the 5th/18th of January 2015, the Patriarchate celebrated the Eve of Theophany.

Α. The feast in Jerusalem

Early in the morning of the aforementioned day, Matins and the Divine Liturgy of St John Chrysostom were performed at the monastic church of Sts Constantine and Helen, followed by the service of the Small Blessing, led by His Beatitude Theophilos, Patriarch of Jerusalem.

On the conclusion of the Blessing rite, the Patriarch proceeded to the Patriarchate, where a supplication was made and the Patriarchal Polychronism sang. There, His Beatitude welcomed the vicar of the church of Sts Constantine and Helen, Archbishop Theodosios of Sebaste, who had led the rite of the Eve of Theophany at St James Cathedral for the Arab-speaking Community.

B. In the river Jordan

From the Patriarchate, the Patriarch left for the river Jordan, accompanied by Archbishop Aristarchos of Constantina.

Driving through Jericho, His Beatitude visited the Monastery of the Prophet Elisha where stands Zacchaeus’ sycamore fig tree. The Abbot, Archimandrite Philoumenos, welcomed the Patriarch at his quarters. Then, the Patriarch left to meet with the Palestinian Prefect of Jericho, whom he addressed in Arabic, see link:  https://en.jerusalem-patriarchate.info/ar/2015/01/18/9544

At the end of the meeting, His Beatitude left the territory of the Palestinian state, passing through the iron border gate. From there, He was accompanied by Israeli soldiers to the Monastery of John the Baptist near the river Jordan.

There, in the forecourt of the Monastery, he was warmly welcomed by Israeli army men of the district of Jericho, Boy Scouts and a great crowd, in the presence of Archimandrite Chrysostomos, Abbot at the Monastery of Abba Gerasimus, Primates and Priests of the Patriarchate as well as priests visiting from other Orthodox Churches.

In the church of this monastery, the Patriarch led the Service of the Ninth Hour of Theophany. From there, He led the procession to the river Jordan.

There, on a platform established by the banks of the Jordan, He performed the rite of the Blessing, in the presence of the Greek Consul-General to Jerusalem, before throwing the holy cross in the river where the Lord was baptized.

On the conclusion of the rite, Archimandrite Chrysostomos hosted guests to lunch at the Monastery of Abba Gerasimus.