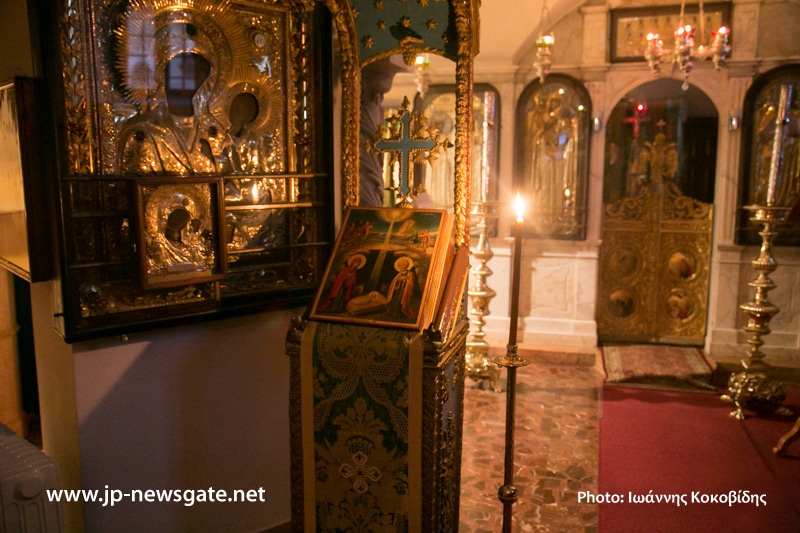 THE FEAST OF THE SYNAXIS OF THEOTOKOS AT THE PATRIARCHATE

On the day after Christmas, the 26th of December 2014/8th of January 2015, the Patriarchate celebrated the Synaxis of Theotokos at the monastic church of Sts Constantine and Helen.

The term “Synaxis of Theotokos” signifies the gathering of the faithful in honour of the Mother of God, a contributor to the mystery of the incarnation and birth in the flesh of our Lord Jesus Christ.

Matins and the Divine Liturgy of the feast were led by His Beatitude Theophilos, Patriarch of Jerusalem. Hagiotaphite Primates, Archimandrites and monks participated in piety. On the conclusion of mass, they walked to the Patriarchates in procession.

On the same day, the Synaxis of Theotokos was celebrated at the Monastery built by the late Hegoumen of St Savvas Monastery, f. Seraphim, in the Village of the Shepherds, commemorating the Shepherds hailing from this very town, those hearing the angels sing and seeing the incarnate Lord lying in the manger (Luke 2, 17).

Vespers and the Divine Liturgy were led by Archbishop Dorotheos of Avila. Co-officiating with him were Archimandrite Ignatios, Hieromonk Efrosynos, and the priests of Beit-Sahour, fathers Savvas, Ibrahim, Issah and Hanna. Members of the youth association and other parishioners of Beit Sahour participated in piety, in spite of the cold weather, rain and snow.

The procession and supplication at the underground Shrine of the Shepherds were followed by a visit to the house of f. Issah-Christos, priest from the Village of the Shepherds and the Patriarchate’s liaison with Arab-speaking Mass Media. Later, Archimandrite Ignatios hosted guests to lunch at the “Palmyra” restaurant.