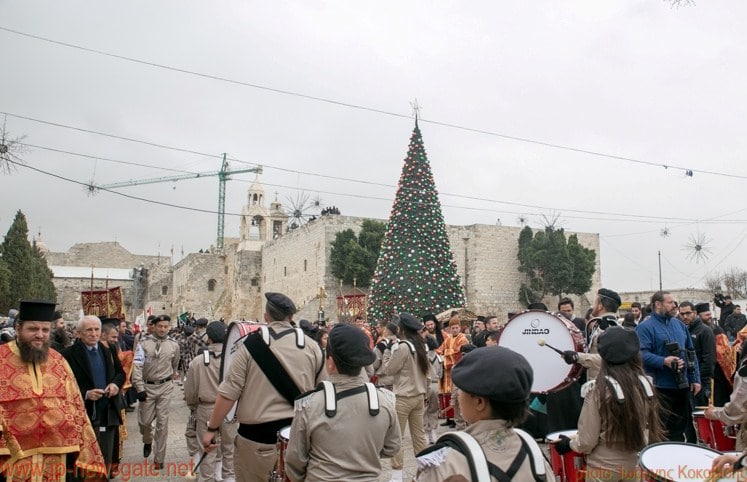 On the morning of Christmas Eve, the Israeli Police, headed by Commander Avi Biton, and Mr Cesar Margie, representing the Israeli Ministry of Religious Affairs, came to the Patriarchate to congratulate Patriarch Theophilos on the occasion of the feast, before walking in procession to David’s Gate.

From there, the Patriarchal retinue was driven to the Monastery of the Prophet Elias. After venerating they left, accompanied by five Israeli horsemen, for the border iron gate near Rachel’s Tomb.

Once the gate was opened by the Israeli Army, His Beatitude and accompanying Primates proceeded, now accompanied by Palestinian motorcyclists, to Bethlehem. They were flanked by faithful, independent of denomination, Orthodox and others, asking for the blessing of His Beatitude.

The Patriarch was warmly received at Bethlehem square by a crowd of people led by Archbishop Theophylaktos of Jordan. Representatives of the Palestinian Autonomy, the Mayor and the Prefect of Bethlehem, Ministers and Police members were also in attendance.

From the square, priests headed the procession towards the court of the Basilica of the Nativity, passing through the low gate, a symbol of the Incarnate Christ’s condescension and its endurance against raids throughout the centuries.

The Patriarchal procession then walked through the Basilica – a privilege reserved only for the Orthodox – to reach the divine Cave, where a supplication was made, after which the Patriarch, Primates and Priests went on to venerate.

After reciting the Great Hours of Christmas at the Katholikon, the ceremony was concluded at 3:30 pm.

On the evening of the same day, His Beatitude hosted dinner in honour of President Mahmoud Abbas. Guests included Palestinian Ministers and Jordan’s Minister of Labour.