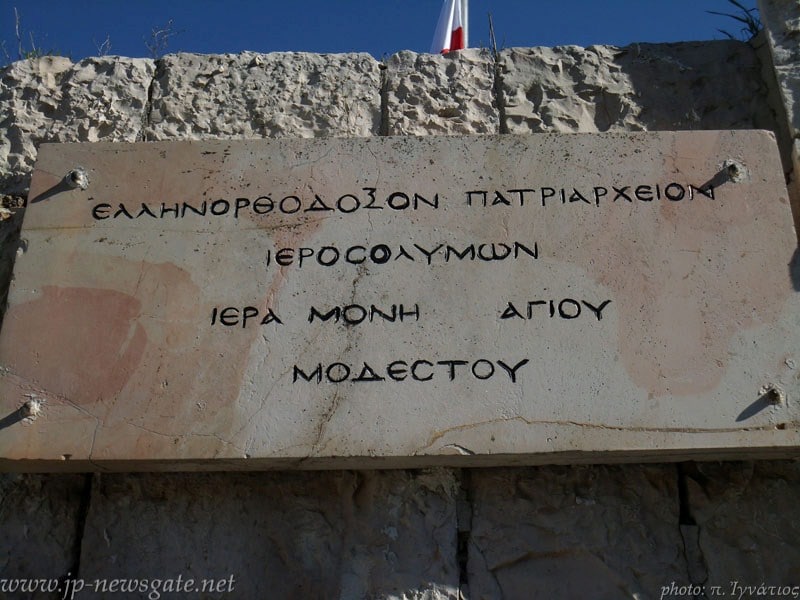 THE FEAST OF ST MODESTUS AT THE PATRIARCHATE

On Wednesday, the 18th/31st of December 2014, the Patriarchate observed the memory of Our Father Modestus, Patriarch of Jerusalem, at the chapel dedicated to his name on the hill of Abu Tor, opposite St Sion in Southern Jerusalem.

St Modestus was the hegoumen of the Monastery of Abba Theodosius the Cenobiarch, who morally and tangibly encouraged and enhanced Christians in the Holy Land, and renovated churches and monasteries left in ruins after the 614 AD Persian raid. He succeeded Patriarch Zacharias of Jerusalem after His dormition.

On the day of the feast, the divine Liturgy was led by the Abbot at the Holy Monastery of the Shepherds in Beit-Sahur, Archimandrite Ignatius. Co-officiating were the Master of Ceremonies, Archimandrite Porphyrios, Hagiotaphite Hieromonks and deacon Markos. The Head Cantor of the Church of the Resurrection sang in Greek, Russian and Arabic. Pilgrims, monks and nuns, as well as members of the Greek parish in Jerusalem, piously attended the service.

His Beatitude Theophilos, Patriarch of Jerusalem, proceeded to venerate in the course of the liturgy.

On the conclusion of mass, Monk Antiochos, the Monastery’s supervisor, hosted the congregation to a reception in the forecourt.