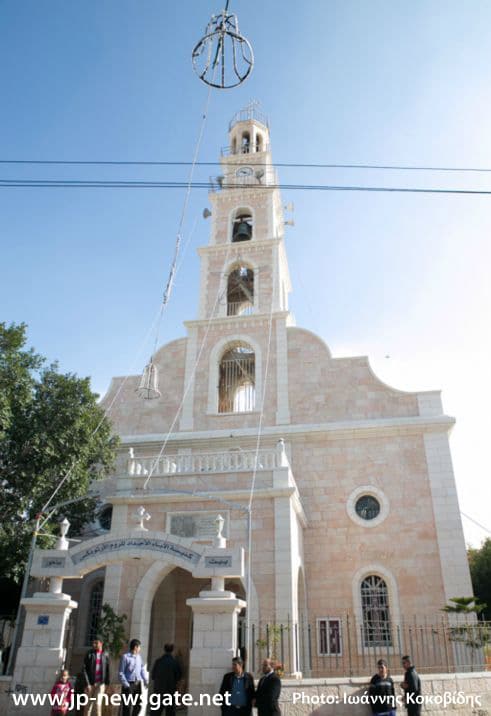 THE FEAST OF THE HOLY FOREFATHERS AT THE PATRIARCHATE

On Sunday, the 15th/28th of December 2014, namely the Sunday of the Forefathers, the memory of the ancestors, according to the flesh, of our Lord Jesus Christ, was celebrated at the Patriarchate. Patriarch Abraham was the first to receive the Lord’s promise that “in his seed all the nations shall be blessed”. The feast was observed at the church dedicated to the Holy Forefathers in Beit-Sahur, the Village of the Shepherds, where shepherds living out in the fields near Bethlehem, saw the infant Lord, wrapped in clothes and lying in a manger. (Luke 2)

In this town, numbering approximately 15.000 inhabitants, half of whom are Arab-speaking Greek Orthodox, Patriarch Theophilos was welcomed at the entrance of the church. The Patriarch went on to lead the Divine Liturgy, with co-officiating prelates: Archbishops Aristarchos of Constantina, and Theophylaktos of Jordan, and the Patriarchal Commissioner in Bethlehem. Also in attendance were Hagiotaphite Hieromonks, Hegoumen Ingatius, Archimandrite Ieronymus, the Arab-speaking vicars of the community, Archdeacon Evlogios and deacons Marcos. The Community’s Choir sang, while a crowd of faithful participated in piety.

During Communion, His Beatitude Theophilos preached the Word of God to the congregation.

On the conclusion of mass, His Beatitude was hosted to lunch at the Magara Restaurant, where he spoke words of praise for Archimandrite Ignatius on his venerating, pastoral and charity work.