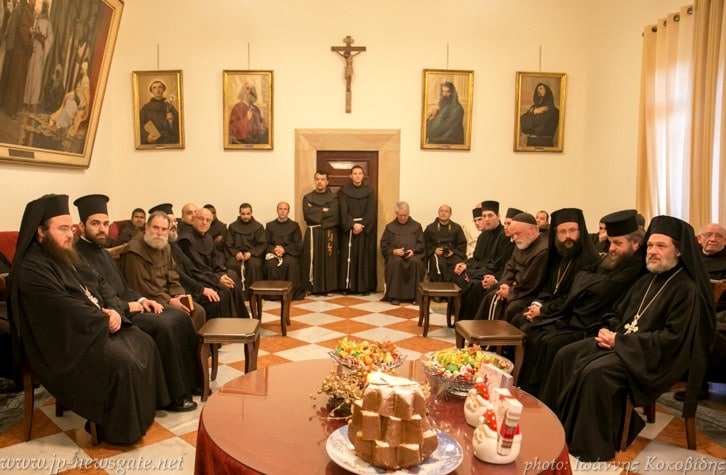 HAGIOTAPHITE FATHERS VISIT CHRISTIAN CHURCHES ON THE OCCASION OF CHRISTMAS

On Thursday, the 14th/27th of December 2014, the Hagiotaphite Brotherhood, headed by His Beatitude Theophilos, Patriarch of Jerusalem, visited local Christian Churches in Jerusalem in celebration of Christmas according to the Gregorian calendar.

The Hagiotaphite Brotherhood follows the Julian calendar for all its feasts; however, it calls on Churches in Jerusalem on their own feast-days whilst the latter reciprocate the visits accordingly, as this custom contributes to reducing the occasional congestion of pilgrims and cultivating a climate of collaboration for the settlement of issues of Christian interest.

In the same context, the Hagiotaphite Brotherhood visited the Franciscan Friars and the Latin Patriarchate in Jerusalem.

In his reply speech, the Custodian said the Franciscans were moved by the words of His Beatitude and that indeed they agree that the sacrament of the Incarnation and birth of our Lord Jesus Christ in the flesh constitutes the basis of our diaconate in the Holy Land and that, encouraged by this fact, we must serve the Holy Shrines consistently and with devotion within collaboration in the benefit of Christians in the Holy Land.

Special emphasis was placed on the testament of Christians in the Holy Land, projecting the message of peace and hope across the world, where innocent Christians and non-Christians are unjustly persecuted and murdered.

After these visits, Archbishop Demetrios of Lydda, Secretary of the Holy and Sacred Synod, visited the Lutheran Church in the Holy Land, where festive addresses were exchanged between him and Bishop Munib Younan, as well as the Head of the German-speaking Lutheran Community in Jerusalem, Rev. Propst Wolfgang Schmidt.