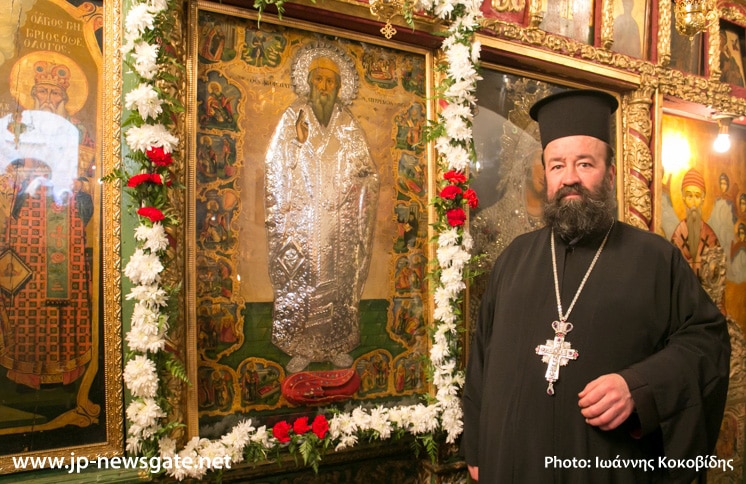 THE FEAST OF ST SPYRIDON OBSERVED AT THE PATRIARCHATE

On Thursday, the 12th/25th of December 2014, the Patriarchate celebrated the feast of St Spyridon, Bishop of Trimythous, in the Holy Monastery dedicated to his name. The Monastery is adjacent to the wall of the Old City of Jerusalem before Damascus Gate.

As is well-known, St Spyridon, a father in the Church of the 4th century, participated in the First Ecumenical Council as a proponent of the homoousion, the same substance between the Son and the Father. A humble, serene and virtuous man, he was offered by God the gift of performing miracles. His holy relic is kept on the island of Corfu, Greece.

The divine Liturgy was held on the day of the feast, led by Archbishop Dorotheos of Avila with co-officiating Hieromonks and Arab-speaking presbyters. The service was attended by a pious congregation of monks, nuns, Greek and Arab-speaking Jerusalemites and pious pilgrims.

During the service, Patriarch Theophilos arrived at the Monastery to venerate, accompanied by Hagiotaphite Fathers.

On the conclusion of the divine Liturgy, the Hegoumen, Archimandrite Sergios, courteously hosted the Prelatic Retinue and the congregation to a reception in his quarters.