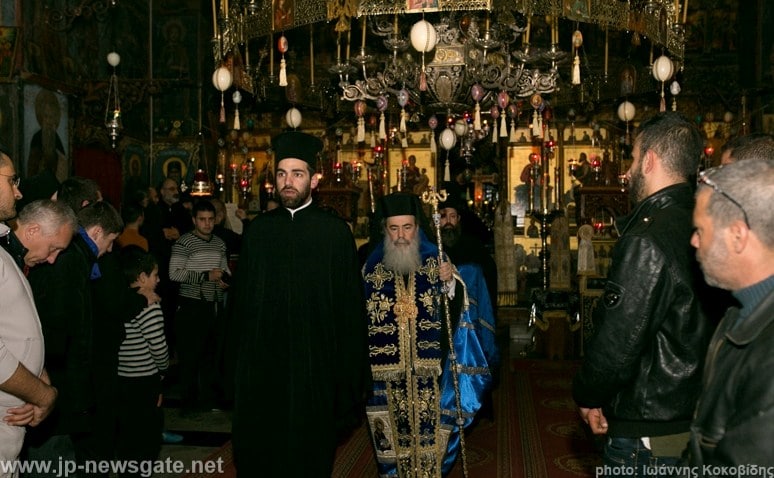 THE FEAST OF HOSIOS SAVVAS THE CONSECRATED

On Thursday, the 5th/18th of December 2014, the Patriarchate observed the feast of hosios Savvas the Consecrated in the Monastery dedicated to him. The Monastery was founded in the late 5th century in the desert of Judea, which lies in the West Bank of Cedars stream.

Since its founding, the Monastery has remained a powerful monastic center and a bastion of Orthodox teaching, having yielded Fathers, teachers, theologians, melodists, poets and holy martyrs.

Today it operates as a Lavra for approximately 20 monks. Women are still forbidden to visit it.

The memory of hosios Savvas the Consecrated is celebrated alongside the memory of St Barbara, St John Damascene, who had lived and is now buried in the Monastery, and St Nikolas, Bishop of Myra, Lycia.

For the three-day celebrations, His Eminence Dorotheos, Archbishop of Avila, visited the Monastery.

To observe the feast of St Savva, His Beatitude Theophilos, Patriarch of Jerusalem arrived on the eve of the feast, namely on the 4th/17th of December 2014. The Patriarch was received in the forecourt of the Monastery by the Very Reverend Archimandrite Evdokimos, Hagiosabbite Fathers and Arab-speaking priests from Bethlehem and Galilee, as well as priests visiting from Greece, and Arab-speaking faithful from Galilee, Bethlehem, Beit-Jalla and Shepherds Village.

After venerating the relics of Hosios Savvas in the katholikon of the Lavra, His Beatitude was treated to a reception at the Church Board Hall (Epitropikon). At approximately 8:30 pm, the vigil began for the ceremony of the Small Compline and the Salutations of Hosios Savvas the Consecrated, a poem of the late f. Gerasimus, Vespers and Breaking bread.

The divine Liturgy was led by Patriarch Theophilos. Co-officiating were Archbishop Doroteos of Avila, Archbishop Aristarchos of Constantina, Archbishop Makarios of Qatar, Hagiotaphite Hieromonks and Arab-speaking priests, Archdeacon Evlogios and deacon Markos. Archimandrite Aristovoulos sang in Greek, Russian and Romanian on the right, with Archimandrite Philotheos on the left. Arab-speaking faithful and pilgrims from Greece, Russia and Romania participated in piety in a mystic, spiritual ambiance with lit candles.

During Communion, His Beatitude spoke in Greek of Hosios Savvas who painfully sought and conquered virtue, consecrating himself with the grace of the Holy Trinity.

Many among the faithful participated in the Sacrament of the Eucharist. On the conclusion of the vigil, which ended at 8:00 am, kollyva, bread and wine were offered to the faithful before lunch, which was blessed by His Beatitude.

After lunch, the Patriarch returned to Jerusalem passing through the Monastery of Hosios Theodosios the Cenobite. Archbishop Dorotheos stayed for the feast of St Nikolas.

In Jerusalem, the feast of St Savvas was observed at the chapel dedicated to him within the Monastery of the Holy Archangels, led by Archbishop Demetrios of Lydda.