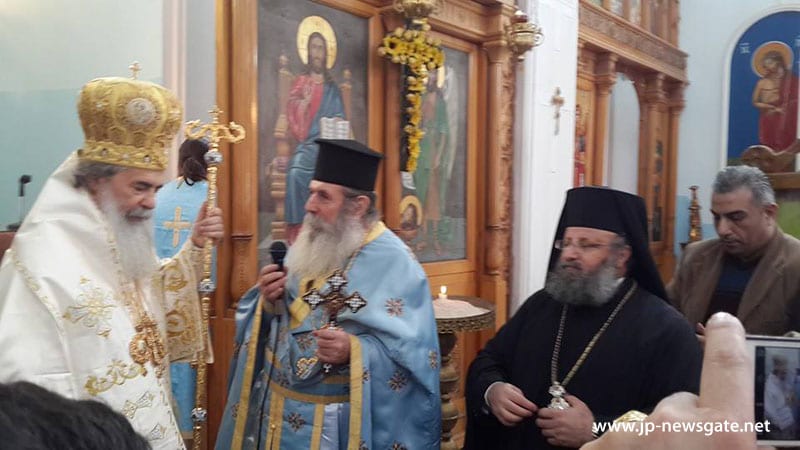 HIS BEATITUDE THE PATRIARCH OF JERUSALEM OFFICIATES IN AQABA, JORDAN

On Sunday, the 24th of November/7th of December, H.B. Patriarch Theophilos of Jerusalem officiated at the Patriarchal Church of St Nikolas in Aqaba.

This fine Church, standing at the center of Aqaba, a city in the Northern boundaries of the jurisdiction of the Patriarchate of Jerusalem, was built by the late Patriarch Diodoros of Jerusalem. Adjacent to the Church is a school, a hall of events and the priest’s residence.

Owing to its geographical position and its port, Aqaba, a city of approximately 100.000 residents, is today a trade center. What is more, its climate has elevated it to a tourist destination. The city is the See of the Rum Orthodox Arab-speaking Community of St Nikolas, numbering approximately three hundred families.

The Patriarch of Jerusalem officiated at the divine Liturgy commemorating the feasts of the Presentation of Theotokos and of St Nikolas, Bishop of Myra, Lycia. Co-officiating were Archbishop Aristarchos of Constantina; the Patriarchal Commissioner in Northern Jordan, Archbishop Philoumenos of Pella; the Abbot in Fhes, Archimandrite Ieronymos; Presbyter Vassilios, Archdeacon Evlogios and deacon Ioannis of Irbet. A great crowd of faithful participated in the service.

To the pious congregation, attending mass to receive the blessing of Patriarch Theophilos, His Beatitude preached the Word of God in Greek.

Several among the faithful received Communion. On the conclusion of mass, His Beatitude offered a pectoral cross and a blessing cross to Steward f. Vassilios.

Extending his thanks, the priest invited His Beatitude to return to the city and bless the flock, once His pastoral obligations allow Him to do so.

After mass, His Beatitude distributed gifts to pre-school children, before visiting the school’s premises.

At noon, He was attended lunch offered by the community aboard a boat in the Gulf of Aqaba.

In the evening, He attended dinner hosted in His honour at the hotel.

On the following morning, His Beatitude arrived in Amman, to return to Jerusalem on the evening of Monday.