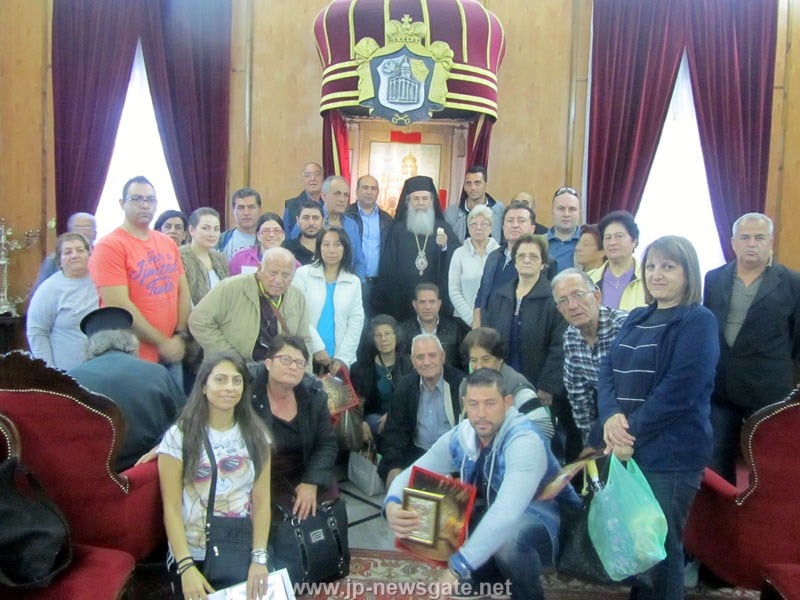 On Thursday, the 7th/20th of November 2014, a twenty-member group of Cyprus Police Officers, led by Nicosia District Commissioner Demetrios Demetriou, visited the Patriarchate.

The delegation was received by H.B. Theophilos, Patriarch of Jerusalem, in the presence of Hagiotaphite Fathers. During the meeting, His Beatitude referred to the spiritual aid granted to pilgrims visiting the Holy Sites of Pilgrimage that are drenched with the blood of our Saviour, Jesus Christ. He also talked of the long links connecting the Church of Jerusalem to the Church of Cyprus since the years of the New Testament and along the course of the history of the Church, as attested by the pastoral diaconate of Cypriot Hagiotaphites, e.g. St George the Cypriot of Hozeva and the New-Martyr Hagiotaphite, St Philoumen the Cypriot.

The District Commissioner thanked His Beatitude for His fervent words and pledged to offer the help of the Cyprus Police to the Patriarchate as well as to the recently restored Exarchate of the Holy Sepulchre in Cyprus.

Having received His Beatitude’s blessing, the police officers carried on their pilgrimage on the way to the Holy Sepulchre and the other Shrines.