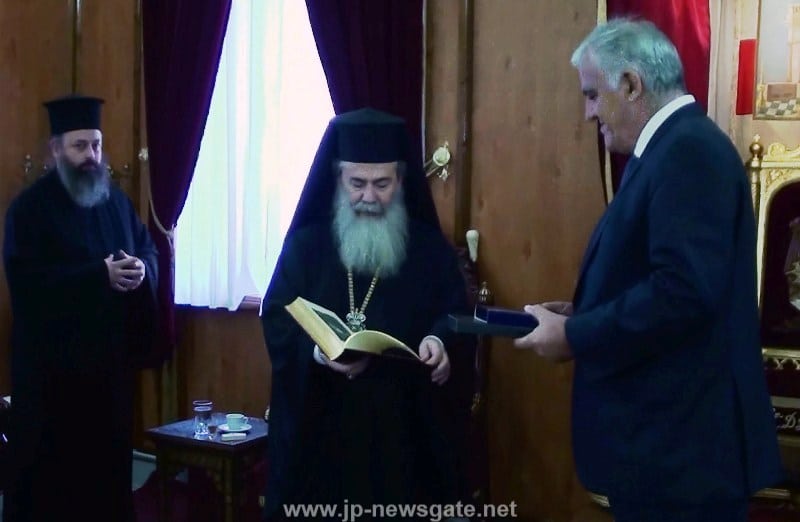 THE GREEK GENERAL SECRETARY OF CIVIL PROTECTION VISITS THE PATRIARCHATE

On Tuesday, the 19th of October/11th of November 2014, Mr Seraphim Tsokas, General Secretary of Civil Protection at the Hellenic Ministry of Public Order, visited the Patriarchate. Mr Tsokas was accompanied by his esteemed wife and Greece’s Consul-General to Jerusalem, Mr Georgios Zacharoudiakis.

Mr Tsokas and his attendants were received by H.B., Patriarch Theophilos of Jerusalem, and Hagiotaphite Fathers.

An interesting discussion took place during the meeting, on the historical and statutory responsibility of the Patriarchate to safeguard the Holy Sites of Pilgrimage, as well as the need to maintain the current status of veneration, as the only way to achieve a safe and peaceful coexistence between followers of different Christian denominations in the Holy Land and by extension, of the three monotheistic religions.

Indicative of the aforementioned stance of the Patriarchate was the visit, yesterday, of the Heads of Christian Churches in the Holy Land to the Mosque of Omar area. The visit was conducted in support of the prevalent status applied in the area, against extreme Jewish religious elements attempting to alter it.

On the conclusion of Mr Tsokas’ visit, His Beatitude offered him the book on the Church of Jerusalem by Chrysostomos Papadopoulos, as well as Jerusalemite blessings.

Mr Tsokas then left the Patriarchate in order to venerate at the Church of the Resurrection and the Holy Sepulchre.