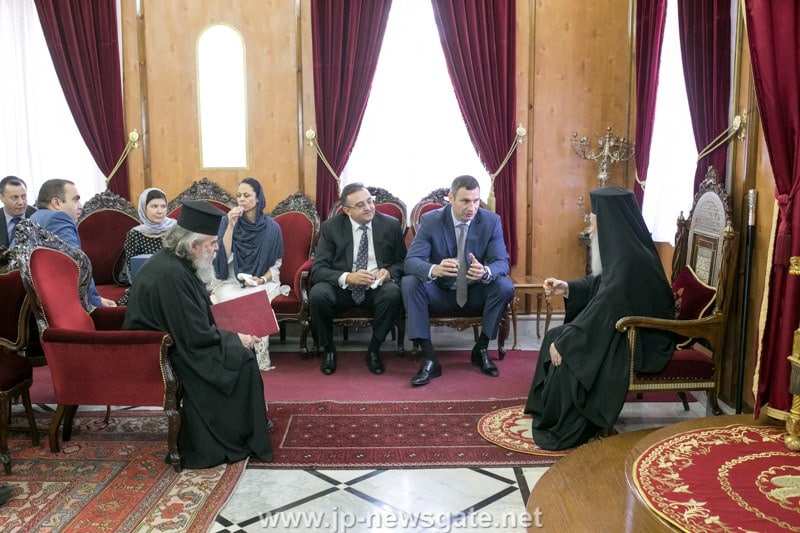 THE MAYOR OF KIEV VISITS THE PATRIARCHATE

On Sunday, the 20th of October/2nd of November 2014, the Mayor of the City Kiev, Mr Vitaliy Klychko, an internationally acclaimed boxing champion, visited the Patriarchate. He was accompanied by the Ambassador of Ukraine to Israel, Mr Hennadii Nadolenko, and by Avrum Silman.

They were received by H.B. Theophilos, Patriarch of Jerusalem, and Hagiotaphite Fathers.

An interesting discussion took place in the context of the meeting, on the current situation in Ukraine and how it could be cured in the Ecumenical spirit of Orthodoxy, which includes all nations and, while respecting their national singularity, keeps them joined to its core.

Reference was also made to the importance of the city of Jerusalem and to the Patriarchate’s religious and peacemaking work in the wider Middle East region. The pastoral activities of late Patriarchs of Jerusalem were also brought up, i.e. Patriarchs Theophanes and Paisios, protectors of the Orthodox flock from the Latin propaganda.

Mr Vitaliy Klychko expressed his conviction that sports contribute to man’s physical wellbeing, whereas His Beatitude recalled the ancient Greeks’ motto – ‘a healthy mind in a healthy body’, adding that extreme religious and political elements must be tackled through initiatives that could keep the youth on the way to healthy destinations.

Gifts were exchanged between Mr Klychko and His Beatitude, as the Patriarch wished that the Mayor play a conciliatory role in Ukraine’s political problem through the mediation of Theotokos.