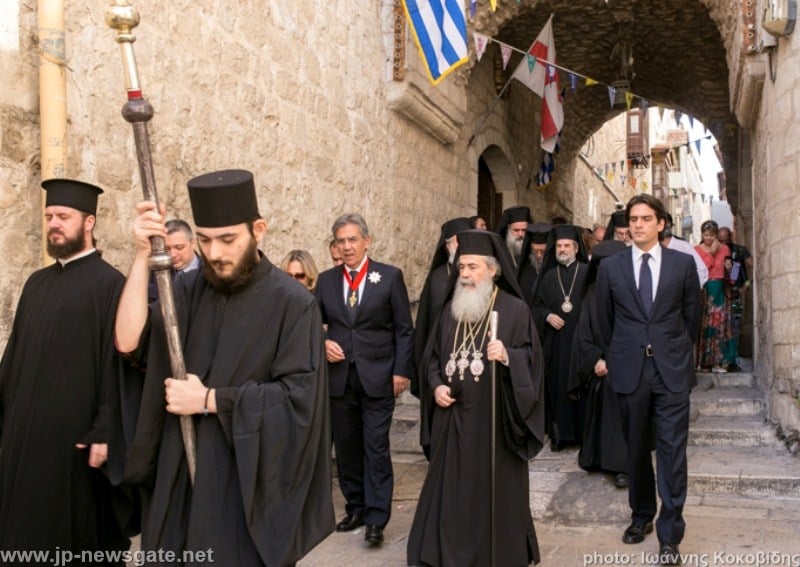 DOXOLOGY ON THE 28TH OF OCTOBER NATIONAL DAY

On Tuesday the 15th/28th of October 2014, Doxology was held at the Church of the Resurrection, in celebration of the 28th of October 1940 national day.

Doxology was performed in the form of extending gratitude to God for His help in liberating Greece from the burden of the 1940 Italian and German occupation, and of making a supplication for the repose of those heroically fallen for their faith and country.

On the conclusion of Doxology, a reception was hosted at the Patriarchate, where His Beatitude addressed guests in Greek.

In his own speech, the Consul-General of Greece said the following:

The epos of 1940 has been indelibly imprinted on our collective memory as part of our national identity and consciousness.

Today we pay minimum tribute to the worthy guardians and keepers of our traditions, who sacrificed their lives in the struggle for the freedom of the Homeland. We stand in awe in front of the splendour of their souls, with gratitude in the face of their sacrifices, and with pride of their heroism. We honour their memory and contribution. They fulfilled their duty.

Let us now consider our own duty, and our own responsibilities vis-a-vis our History and the future of our Nation.