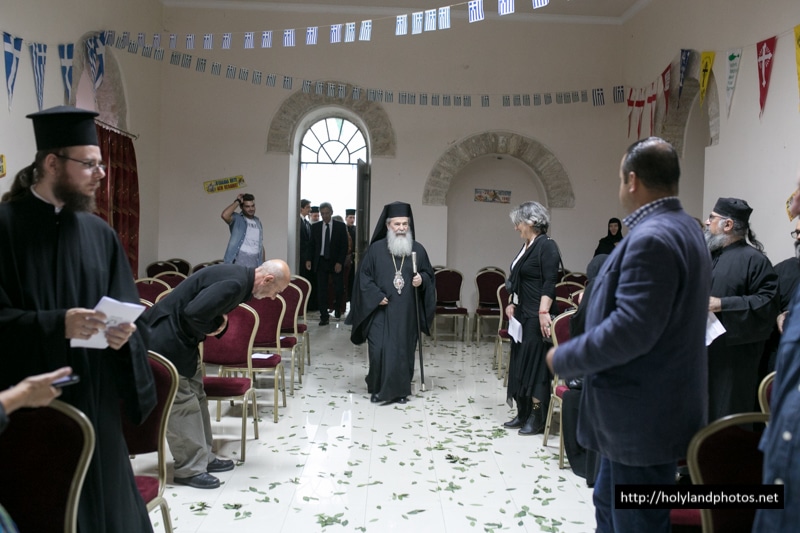 28TH OCTOBER CELEBRATIONS AT THE SCHOOL OF SION (2014)

His Beatitude Theophilos, Patriarch of Jerusalem, was invited to attend the celebrations, accompanied by the Patriarchal Commissioner, the Most Reverend Isychios, Metropolitan of Kapitolias; the Elder Secretary-General, His Eminence Aristarchos, Archbishop of Constantina; and the Elder Sacristan, Archbishop Isidoros of Hierapolis. His Excellency the Greek Consul-General to Jerusalem, Mr Georgios Zacharoudiakis, attended the celebrations with his esteemed wife. Also in attendance were Hagiotaphite Fathers, monks and members of the Greek Parish.

Principal f. Nikolaos Zervis welcomed guests, whereas the panegyric of the day was delivered by philologist, Mr Constantinos Komodikis. Students at the school recited poems under the guidance of philologist Mrs Eleni Economou, and the Head Cantor of the Church of the Resurrection, Archimandrite Aristovoulos, led the choir in performing patriotic songs. Mrs Francesca Rocca performed solo violin pieces.

The celebrations included references on the dictatorial attacks of Italy and Germany against our country during World War II, undermining Greece’s territorial integrity and depriving Greeks of their freedom. The Greek people’s struggle to regain their freedom through hardships, losses and sacrifices was commemorated as a gift from God and their ancestors.

On the conclusion of the feast, Patriarch Theophilos praised the Principal, teachers and students at the School for their diligent and moving performance, held in homage to the fighters of 1940, urging them to carry on their work to the benefit of the Patriarchate and our nation.