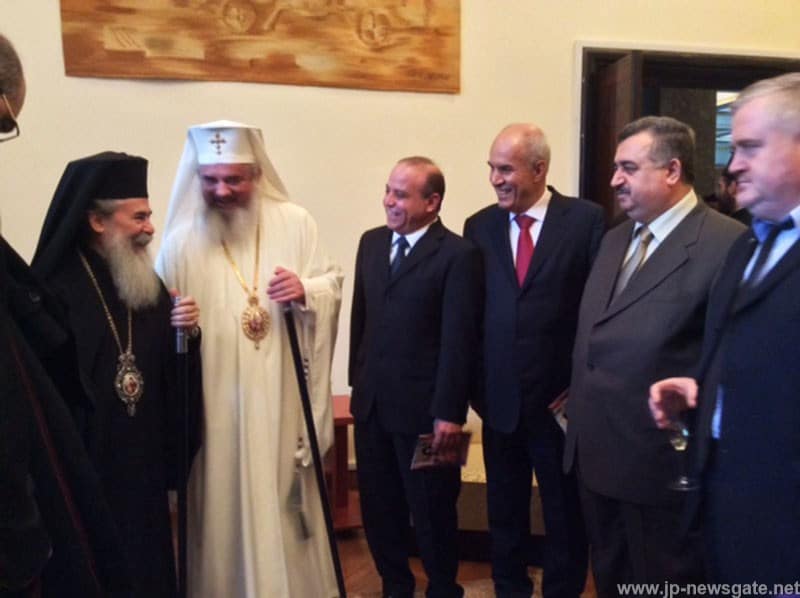 On Saturday, the 12th/25th of October 2014, His Beatitude, Patriarch Theophilos of Jerusalem, attended a meeting with postgraduate students of Religious Studies at the University of Bucharest. The students are conducting research into such fields as Byzantine Hagiography, Philosophy, Neo-Platonism, Philology, Coptic and Ethiopian Studies etc.

Mrs Madea Axinciuc, who initiated the granting of the dignity of Doctor Honoris Causa, thanked His Beatitude by saying that: “for where two or three gather in my name, there am I with them” (Matthew 18,20) and “Behold, how good and pleasant it is when brothers dwell in unity! (Psalm 132).

In His reply speech, His Beatitude said that the Patriarchate of Jerusalem lies at the center of the world, because of the sacrament of salvation, which began from Mount Sinai and was fulfilled through the Lord’s crucifixion and resurrection in Jerusalem. Because of the fact that many people do not acknowledge this fact, the world suffers from political and religious disputes, especially so in the Middle East – where the Patriarchate of Jerusalem has a conciliatory role in the theocratic, religious and political milieu, He went on to add.

Following the speeches, Mrs Axinciuc was invited to confer the distinction of doctor honoris causa, in the presence of His Beatitude the Patriarch of the Church of Romania, prelates, diplomats, the Greek ambassador to Romania, Mr Vasiloconstantakis, Consul Mr Karalekas, the Jordan ambassador, Mr Saker Malkawi, the Palestinian Autonomy, and representatives of the University. Mrs Axinciuc first read out His Beatitude’s curriculum vitae, and then the Laudatio, namely the Commendation, relating His arrival to Jerusalem, his inclusion in the Hagiotaphite Brotherhood, and His multifarious pastoral activities since His election in 2005. Professor Vlad Nistor went on to confer the honorary doctorate.

After a performance by the Patriarchate’s choir, all those in attendance congratulated His Beatitude for this well-deserved distinction.

At noon, His Beatitude and retinue attended lunch hosted by Patriarch Daniel of Romania.

On the afternoon of the same day, His Beatitude visited His Excellency, the President of Romania, Mr Traian Băsescu.

During their meeting at the Presidential Palace, the President said it was with great joy that he welcomed the Patriarch of Jerusalem and His retinue and that He would always remember his visit to Jerusalem, and how helpful His Beatitude had been towards the resolution of the problem which had occurred at the time between the two Churches. He undertook, said the President, a peacemaker’s role.

and offered the President an icon of Jesus Christ.

His Excellency Mr Băsescu went on to add that the Romanian Church is a pillar of protection and strength for the Romanian Nation, and that he had personally brought before the EU the need to protect Christians in the Middle East. “11.000 Romanians” he said, “dwell today in Jordan, along with a total of 500.000 in Israel. Churches are called upon to offer their support where politicians fail. The Church has a great mission towards reconciliation and peace against religious extremists”. “It is an issue”, he concluded, “that I have often raised in the European Union in the course of my ten-year presidential tenure”.

His Beatitude thanked the President for pointing out how distinct the roles of the State and the Church are.

“For this purpose”, His Beatitude went on, “we have been recently invited thrice by the King of Jordan, to work together for peace. Our political visit to Israel was of great ecclesiastical importance. I wish for you God’s blessing in order to sustain your contribution to peace, for the benefit of your people, Orthodox or otherwise”.

The Patriarch of Romania too thanked the President for contributing towards the resolution of the conflict between the two Churches, pointing out the importance of the sites of pilgrimage in the lives of the Churches. Patriarch Daniel also expressed His intention to receive in Romania students from the Greek Orthodox flock of the Patriarchate of Jerusalem.

President Băsescu then conferred on His Beatitude the supreme honorary distinction of Romania, in recognition of His work. Touched, Patriarch Theophilos said that the honour is reflected on the Patriarchate and the Hagiotaphite Brotherhood and that it shall be a visible link between the State of Romania and the Patriarchate of Jerusalem.

The ceremony was followed by veneration at the Chapel of the Dormition of Theotokos, near the Presidential Palace, from where frescoes have been salvaged and restored.

On the evening of the same day, Patriarch Daniel of Romania hosted the Jerusalemite Patriarchal Retinue to dinner.