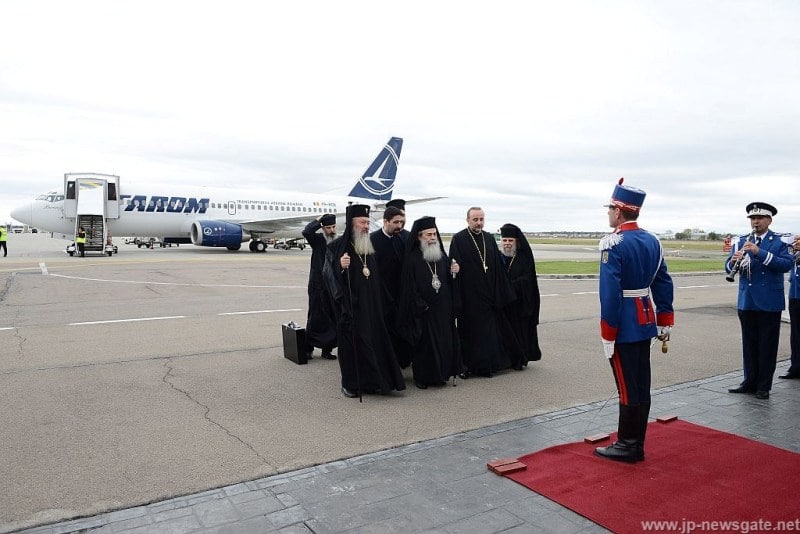 The purpose of the visit is the Patriarch’s participation in the celebrations hosted by the Church of Romania in honour of the glorious Great-Martyr, St Demetrius the Myrrh-Bearer of Thessaloniki, and St Demetrius the New, Bucharest’s patron-saint. Also, Patriarch Theophilos is scheduled to give a lecture at the Patriarchate of Bucharest, where he will be awarded an honourary doctorate.

His Beatitude left Tel Aviv airport on Friday morning, boarding a flight of Tarom Romanian Airlines. He was accompanied by the Elder Secretary-General, Archbishop Aristarchos of Constantina, Archdeacon Evlogios, and monk Antiochos. They arrived in Bucharest at 12:00 noon. They were later joined by the Very Reverend Nektarios, Metropolitan of Anthedon, of the Patriarchate of Constantinople.

At Bucharest airport, Patriarch Theophilos was welcomed with honours by Metropolitan Andreas of Cluj Maramoureş and Sӑlaj, representing Patriarch Daniel of Romania, as well as by tenths of Prelates and Priests. To complete the official welcoming, the “Polychronism” and “Lord, save your people” were performed in the Byzantine style at a specially arranged hall in the airport, followed by a supplication for life, health and salvation. Metropolitan Andreas then welcomed the Patriarch, extending thanks for His visit and the blessing of the Holy Cross.

In His reply speech, His Beatitude thanked the Triadic God for this visit, and the Patriarch of Romania for welcoming Him, adding that the Orthodox Churches do not maintain mere relations; they are indeed linked by communion in Christ, stemming from His sacrifice on the Cross, “a fragment of which we bring today from Jerusalem for the blessing of the Romanian people”. His Beatitude also thanked His Excellency the President of Romania, Mr Traian Basesco, whom he had received at the Patriarchate.

After the veneration of the Holy Cross, the retinue was driven to the Patriarchate of Romania, in the forecourt of the Cathedral of Sts Constantine and Helen and St Demetrius the New. There, a crowd of priests and pious faithful were waiting for the blessing of the Holy Cross and of the Patriarchate of Jerusalem. On an outdoors holy bema, His Beatitude Patriarch Daniel of Romania welcomed Patriarch Theophilos of Jerusalem, addressing Him in English. Patriarch’s Theophilos reply speech may be reached here: https://en.jerusalem-patriarchate.info/2014/10/24/9541

The speeches were followed by veneration at the holy relics of St Constantine Brӑncoveann, of St Demetrius, and the Holy Cross. Guests were then showed to the Patriarchate’s interior, which features remarkable 19th c. architecture and decoration, before being hosted to an Abrahamic Lunch. After resting at the Marriot hotel, they dined at Doina restaurant, which concluded the first day of Patriarch Theophilos’ visit to Romania.