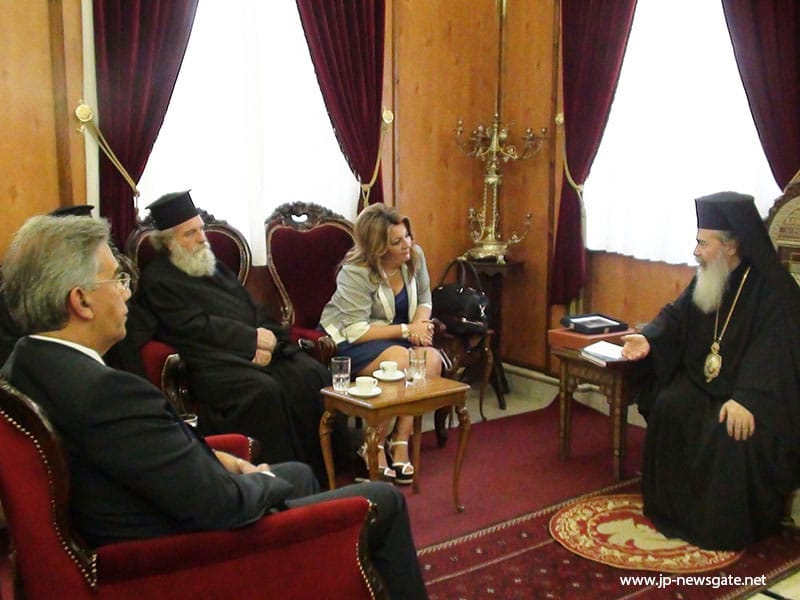 On Monday, the 30th of September/13th of October 2014, “Nea Dimokratia” MP, the Rt. Hon. Mrs Maria Antoniou, visited the Patriarchate accompanied by Archimandrite Galaktion, in the presence of the Greek Consul-General to Jerusalem, Mr Georgios Zacharoudiakis.

Mrs Antoniou was courteously received by H.B., Patriarch Theophilos of Jerusalem, the Patriarchal Commissioner, the Most Reverend Metropolitan Isychios of Kapitolias, and the Secretary of the Holy and Sacred Synod, His Eminence Archbishop Demetrios of Lydda.

An interesting discussion took place during the meeting, on the centuries-long presence of Greek Orthodox Christians in the regions falling within the Patriarchate’s jurisdiction, their current situation in the Middle East, the Patriarchate’s peacemaking role and its harmonious collaboration with the governments of Israel and the Palestinian Autonomy. His Beatitude also referred to the archeological and architectural interest pertaining to the Church of the Resurrection, the Holy Sepulchre and all holy shrines within Jerusalem.

After the discussion, His Beatitude offered Mrs Antoniou the “History of the Church of Jerusalem” edition by Chrysostomos Papadopoulos, a pectoral mother-of-pearl cross, and an icon of Theotokos and the Holy Sepulchre.