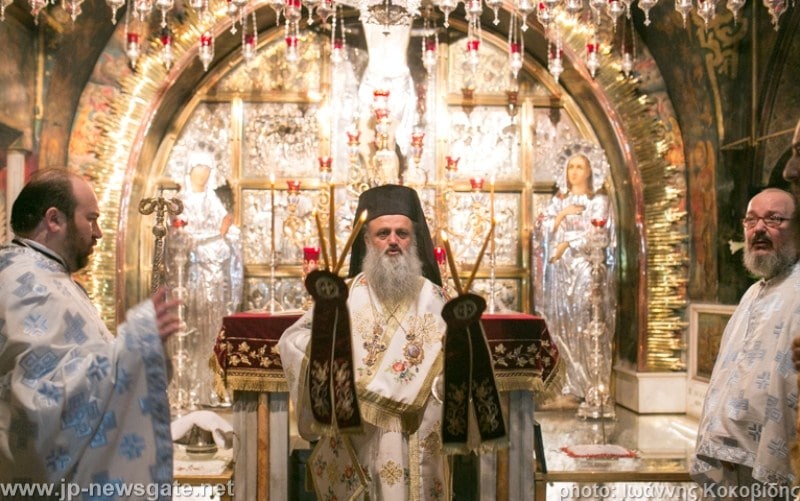 On Saturday, the 28th of September/11th of October 2014, after Archbishop Demetrios of Lydda led the morning Divine Liturgy on the Horrendous Golgotha, a memorial service was held for the late Principal, f. Photios Kiousis, forty days after his passing. The service was led by His Beatitude, Patriarch Theophilos of Jerusalem. Hagiotaphite Prelates and Hieromonks co-officiated at the service, as the Head Cantor of the Church of the Resurrection, Archimandrite f. Aristovoulos, sang with students at the Patriarchal School. Also in attendance were monks, nuns and faithful from Jerusalem as well as pilgrims from Greece, Russia, Cyprus and Romania.

The late monk Photios belonged to the lavra of Hosios Savvas the Consecrated, where he was tonsured monk by the late f. Seraphim. He was commissioned by the Patriarchate to teach Physics at the Patriarchal School of Jerusalem, before taking on the position of Principal in 2005. In the course of his service, he was very diligent both as an educator and a monk.

Patiently he endured his painful illness, before commanding his soul to the Lord on the 23rd of July/5th of August 2014. Father Photios is buried at the Monastery of his repentance.

On the conclusion of the Memorial Service and the distribution of kollyva at the Patriarchate, His Beatitude encouraged all those observing the memory of monk Photios, to emulate his example in being thorough with his monastic duties and honouring the Hagiotaphite Brotherhood.