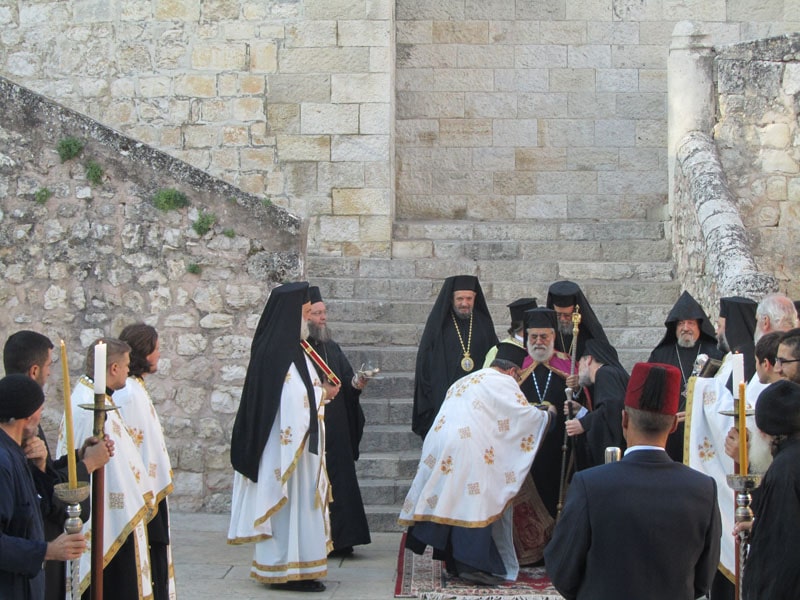 THE NATIVITY OF THE THEOTOKOS OBSERVED AT THE PATRIARCHATE

On Sunday, the 8th/21st of September 2014, the Patriarchate celebrated the Nativity of Theotokos at the Tomb of the Mother of God in Gethsemane.

The divine Liturgy was performed by the Most Reverend Chrysostomos, Metropolitan of Kition, of the Church of Cyprus. Co-officiating were His Eminence Dorotheos, Archbishop of Avila, and the Most Reverend Seraphim, Metropolitan of Zimbabwe, of the Patriarchate of Alexandria. Both primates have visited Jerusalem as representatives of their respective Churches, in order to participate in the 6th Joint Commission on Anglican-Orthodox Dialogue.

In attendance at the service were nuns and pilgrims visiting the Holy Land for veneration in spite of the recent events in Gaza.

On the conclusion of the divine Liturgy, Archimandrite Nektarios hosted the Prelatic retinue to a reception at the Hegoumen’s quarters.

The feast of the Nativity of Theotokos was also celebrated in the town of Beit-Jalla, where the Rum Orthodox Community maintains a Church dedicated to this feast.

In Beit-Jalla, the divine Liturgy was led by Archbishop Theodosios of Sebaste. Co-officiating were Archimandrite Narkissos and the town’s vicars. The leading Primate taught the word of God in Arabic to a large crowd of faithful.

The service was followed by a procession along the streets in the vicinity of the church. Participating in the procession were Boy Scouts and the town’s Charity institutions.