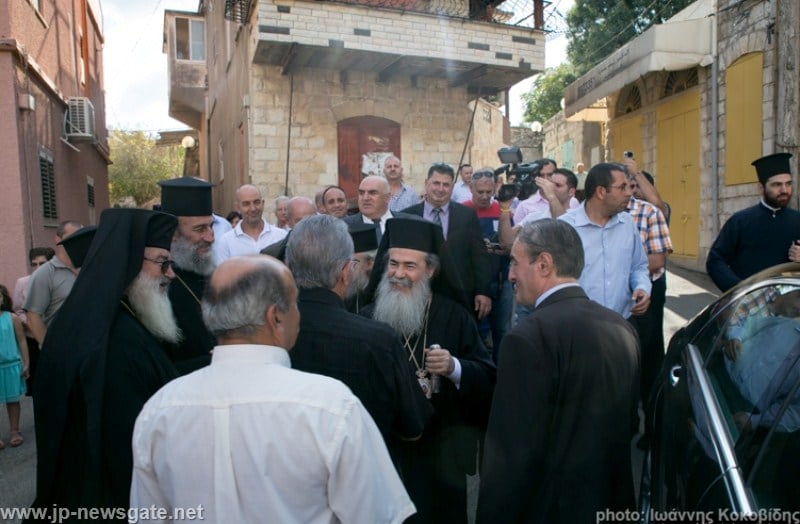 On Sunday, the 8th/21st of September 2014, H.B. Patriarch Theophilos of Jerusalem led the Divine Liturgy in the Greek Orthodox Arab-speaking Community of Tarshiha, a town in the Accra-Ptolemais region of Northern Israel, on the occasion of the centennial of the Church of the Prophet Elias. The centennial was celebrated on the feast of the Nativity of Theotokos.

Before the service, His Beatitude was warmly welcomed to the town by its Orthodox crowd, priests and the Mayor.

Co-officiating with the Patriarch were: the Most Reverend Kyriakos, Metropolitan of Nazareth; the Elder Secretary-General, Archbishop Aristarchos of Constanina; the Hegoumen of Mt Tabor Monastery, Archimandrite Hilarion; Hieromonk Martyrios, Hierodeacon Dionysios and Archdeacon f. Evlogios, as well as priests from neighbouring Communities. The town’s Orthodox population observed the divine Liturgy in piety, while cantors from the Community sang during the service.

Before the apolysis, the Patriarch awarded f. Gregorios a Steward’s Cross, an icon of Christ and Theotokos, and a set of holy vessels with a blessing cross. Members of the Church Board were offered a cross of the Holy Sepulchre.

During a reception hosted after the Divine Liturgy at the new Events Hall, His Beatitude made a donation of 15.000$ to be used for the completion of the Church’s restoration.

The head priest of Tarshiha, Presbyter Gregorios, spoke on behalf of the Community to extend his thanks for the Patriarchate’s support, manifested by means of previous aid for the renovation of the Church in Tarshiha and also through the Patriarch’s presence at the centennial celebrations.