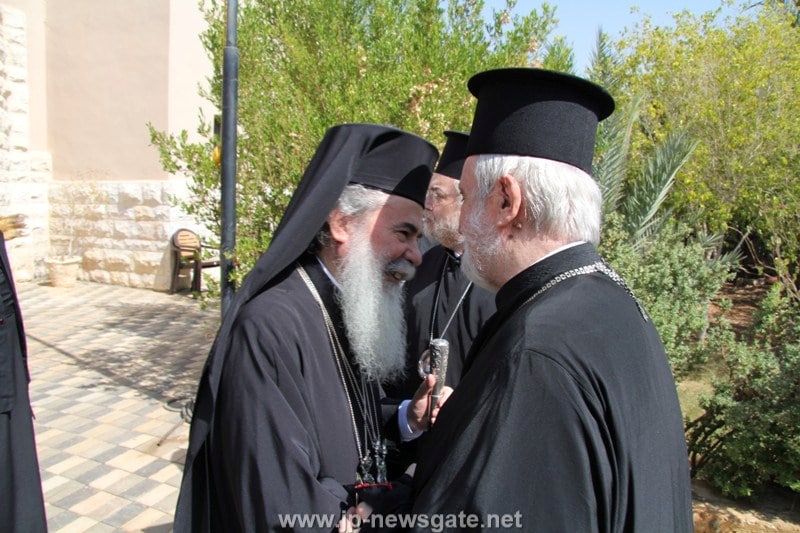 On Wednesday, the 4th/17th of September 2014, the theological dialogue between the Orthodox and the Roman Catholic Church officially opened at the “Conference Center” of the Jordan Government, near the Lord’s Baptismal Site in the East Bank of the river Jordan.

The theological dialogue, first initiated in 1980, carries on as bilateral Committees of the two participating Churches meet every two years at a location proposed by the Church assigned to host the 70 members.

This year, the Orthodox Church hosts the dialogue at the subvention of the Patriarchate of Jerusalem. Jordan was proposed as location for the meeting of the Joint International Commission, according to the recent request of His All-Holiness, Ecumenical Patriarch Bartholomew, and the Secretary-General of the Orthodox Committee for the Dialogue, the Most Reverend Gennadios, Metropolitan of Sasima.

The topic examined by the Joint International Committee, which will be working at the Landmark Hotel in Amman between Monday the 2nd/15th of September and Tuesday the 10th/23rd of September 2014, is “Synodality and Primacy”.

His Eminence Theophanes, Archbishop of Gerassa, represents the Patriarchate of Jerusalem at the dialogue, together with the Emeritus Professor at the University of Athens Theological School, Mr Georgios Galitis.

On the aforementioned day, the 4th/17th of September 2014, partakers in the dialogue visited the Holy Monastery of John the Baptist on the West Bank of the river Jordan, where they were welcomed by H.B. Patriarch Theophilos of Jerusalem; the Monastery’s founder, the Most Reverend Benedict, Metropolitan of Philadelphia; the Elder Secretary-General, Archbishop Aristarchos of Constantina, and Archimandrite Ieronymos, abbot in Fhes. From there, they proceeded to the bank of the Jordan river, to be blessed in its waters.

Subsequently, the representatives of the two Churches gathered at the “Conference Hall” where the Secretary General of the Orthodox Commission, Gennadios of Sassima, welcomed Patriarch Theophilos and called upon Him to address the gathering. The Patriarch’s address, in English, may be read here: https://en.jerusalem-patriarchate.info/2014/09/15/8925

In his reply speech, Cardinal Koch said how pleased he was for the fact that the meeting took place on a site of such spiritual significance, namely the Lord’s Baptismal, especially during a period when Christians are being persecuted.

The event closed with the words of the Co-Chairman, Metropolitan Ioannis of Pergamos, pointing out that the cause of conciliation between the Churches must resonate strongly in the Middle East, a region marked by conflict among peoples, and plagued by numerous human victims and the destruction of basic infrastructures of human life.

A reception followed, during which partakers in the dialogue had the opportunity to exchange views beyond the agenda. His Beatitude left thereafter for his See in Jerusalem.